Guam – Speed, a touch of physicality and overall teamwork were the right ingredients for the Wings FC in the team’s 3-1 win over visiting Rizal Football Association U14 team from the Philippines in the championship game in the U14 division of the 2013 Pacific Summer Invitational Football Tournament at the Guam Football Association National Training Center.

After battling to a scoreless draw in the first half, the Wings FC finally broke the deadlock in the 48th minute. Jordan Jasmin managed to break free from defenders, cut across the goal and found his shot near the edge of the penalty box to the left post that breezed past RIFA’s diving goalkeeper, Joshua Gatchalian.

About 15 minutes later, Nichika Fermin sent teammate Inochi Recella sprinting down the left side with a long pass. Recella burned a RIFA defender, cut in toward the goal for a one-on-one with Gatchalian, and sent his shot to the opposite post to double the Wings’ advantage.

[The ASC ISA Islanders pose with the U12 division championship trophy and gold medals during the awards ceremony of the 2013 Pacific Summer Invitational Football Tournament.]

An alert Sean Evans added a third goal in the 76th minute, following up on Recella’s shot that was blocked, but not secured by Gatchalian.

RIFA’s Teddy Travis erased a clean sheet for Wings keeper Sena Morimoto after he connected on a cross from Emilio Inacay with a header for goal in stoppage time. 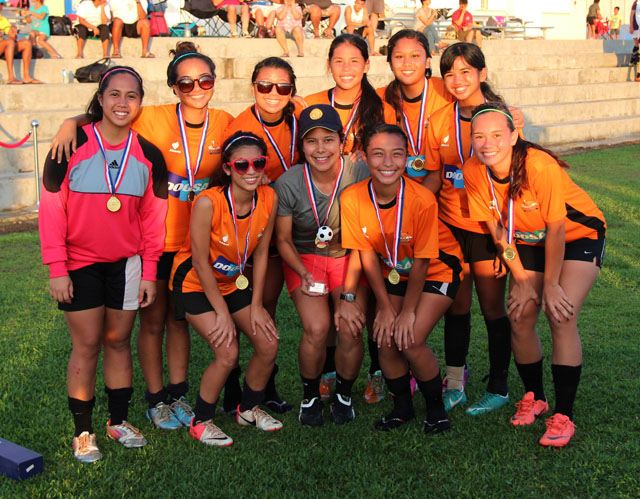 [The Doosan Lady Crushers pose with the U17 All-Girls division championship trophy and gold medals during the awards ceremony of the 2013 Pacific Summer Invitational Football Tournament.]

In the U17 All-Girls division, the Doosan Lady Crushers slipped past Quality Distributors Blue 5-4 for the championship title. Skyylerblu Johnson led the champions with a hat trick and teammates Colleen Naden and Maria Abbey Iriarte added one each to the scoring tally. Aubrienne Pangindian scored twice for Quality Blue and teammates April Talledo and Alyssandra Cruz also scored.

In the U12 division, the ASC ISA Islanders finished as champions with an 8-5 victory over the Tigers. Shawn Sablan, Kein Artero and Mia San Nicolas each scored twice for the Islanders and teammates Joshua Bamba and Gabriel Tan added to the winners’ tally. Seung Min led the Tigers with a hat trick. James Lee and Daniel Lee also scored for the Tigers. 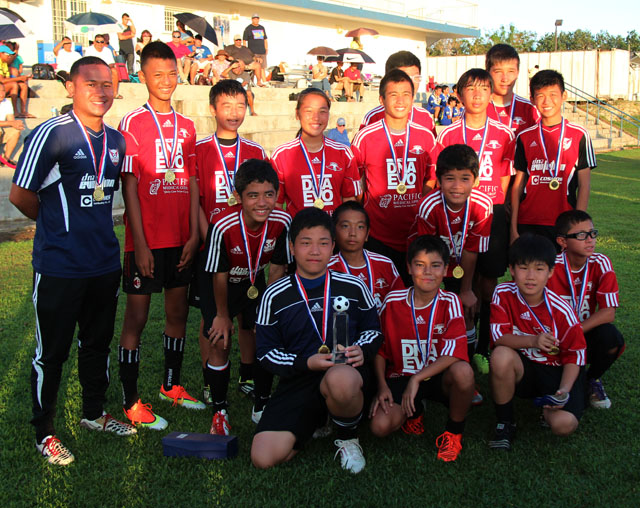 [The Wings FC pose with the U14 division championship trophy and gold medals during the awards ceremony of the 2013 Pacific Summer Invitational Football Tournament.]

Following the U14 division championship match, an awards ceremony was held in front of GFA’s lower pitch. Teams received trophies and each team member also received medals. The Wolverines and Quality Distributors Red, third-place teams in the U12 and U17 All Girls division, shared their medals with their visiting Southville International School counterparts.

The friendly tournament was put on by Kaizen, Kaizen Philippines and GFA. More tournaments with visiting teams from the Philippines are in the pipeline.