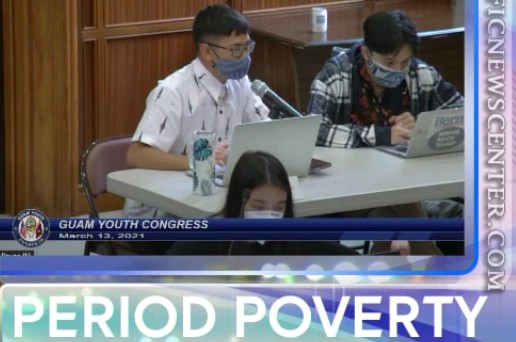 The Guam Youth Congress passed the bill which makes it mandatory for the public school system to provide free menstrual products to their students.

Before going into the details of the bill, GYC Speaker Stephanie Lorenzo defined period poverty as the prevalent phenomenon of being unable to afford products such as pads, tampons, or liners to manage menstrual bleeding

She says period poverty prevents low-income menstruators from bleeding with dignity and with the economic crisis of the island and the price of menstrual products, this leaves people with the choice between buying menstrual products or providing for other necessities for the family.

At times, unsafe and unhygienic materials would be used instead.

Both Lorenzo and co-author Kiana Yabut stressed that access to safe menstrual products is a human right.

“Mr. Chair we give out condoms to keep students safe. Yet we do not provide menstrual products to keep them in school. With one in five individuals missing school due to lack of menstruating products, period poverty is an important yet often ignored public health crisis,” Lorenzo said.

Yabut said: “Period poverty is an extremely important issue in this island yet it is something that is rarely talked about. We have young women missing school during the week of their period simply because they don’t have access to period products because they can’t afford them. There are about 10 months in a school year and an average period is about one week. That’s ten weeks of schools that these girls are missing.”

After passing the bill, the Guam Youth Congress will endorse the legislation to the appropriate committee of the 36th Guam Legislature.

Should the bill go through the legislative process and eventually become law, Guam will be joining states such as California, Illinois, New Hampshire, and Virginia which all have similar legislation in place that provides menstrual products at no cost to students, according to Lorenzo.