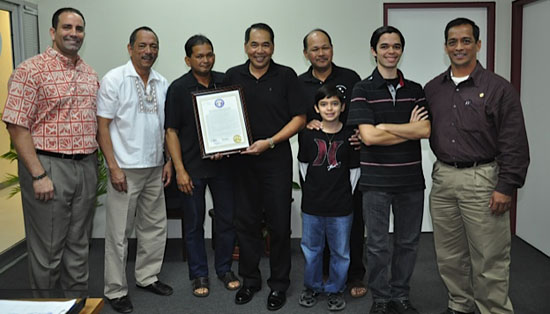 Guam – Rear Admiral Peter Gumataotao was on island last week and received a resolution from the Guam legislature commending him on his promotion to Two-Star rank.

Gumataotao is the first Chamorro-Guamanian to obtain that tank. He was born and raised on Guam in the village of Sinajana and he is a graduate of  Father Duenas Memorial High School and the Naval Academy.

Gumataotao will be assigned as assistant deputy chief of naval operations for operations, plans, and strategy, N3/N5B, Office of the Chief of Naval Operations, Washington, D.C.

Gumataotao has been serving as Commander, Carrier Strike Group Eleven, which is based in Everett, Wash. and includes approximately 6,000 officers and sailors aboard the aircraft carrier USS Nimitz (CVN 68), aircraft of Air Wing Eleven, and surface ships and submarines of Destroyer Squadron 23.

The resolution was sponsored by Senator Frank Aguon Jr.