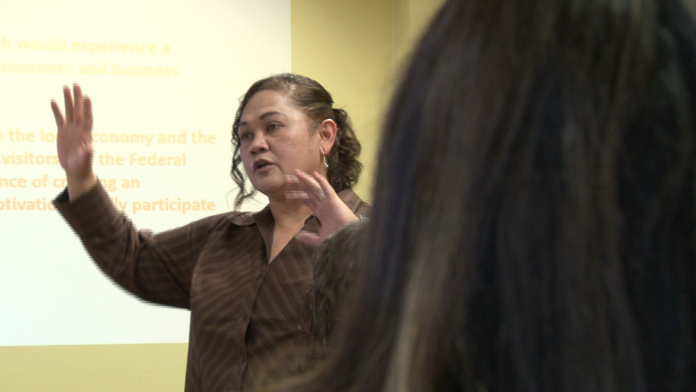 Guam – A 2018 Economic Report released by the University of Guam predicts the island’s economic growth will stall next year with the many uncertainties that lie ahead but there may be some light at the end of the tunnel with a new administration approaching.

The report also found that the fiscal crisis we were facing in 2018 because of the Trump Tax Cuts may not have been as drastic as the government made it seem.

The last 15 years has seen little economic growth for the island–from 2002 to 2017, it grew by just 1.08 percent. Economist Dr. Maria Claret Ruane says 2017 was an uneventful year in terms of economic growth.

It’s too early to tell at this point how 2018 fared, but some initial estimates indicate it may not have been the gloom and doom our government warned us about with the Trump Tax Cuts.

Earlier in the year, GovGuam scrambled to plug deep holes in our budget which was predicted to run anywhere from $120 million to $160 million. There were threats of furloughs, a government shutdown and layoffs.

“It led to a fiscal crisis which kept us busy early in the year and some question whether it was real or fake,” noted Ruane. “So was there really a fiscal crisis or not?”

But there is a flipside, as Dr. Ruane points out. Tax cuts also means larger paychecks.

“We’re spending on this economy; hopefully more buying local than not. So it’s a two-sided situation. Wo when we were worrying about a fiscal crisis–and some people should be celebrating–your paychecks are higher,” she pointed out.

With consumer spending up coupled with the significant tax cuts, our economy saw zero growth, said Ruane. What about the economic forecast for next year?

“So when you put those together our forecast for Guam’s economy is at best … it will be like 2018–zero growth, slightly negative,” she asserted. “There is a good chance that it could actually be negative, as in–OK, I’m still conservative–negative 1 percent, unless, again the year’s just the starting, we can do something about this.”

The good news is that not everything is out of our control—at least one third of it is within our grasp and that is our local economy. The bad news is, our number one economic driver—tourism—is looking bleak.

While the administration touts record growth in the tourism industry in terms of arrivals, the economic side of it is actually on the downside. Korea surpassed Japan in arrivals for the first time, but the Korean economy is expected to take a hit next year.

“Again, that’s good news on the surface. The issue is that [Korean] spending is less, their per capita spending is less than Japanese spending. So to be honest, 2018 overall tourist spending is actually quite low,” Ruane explained.

The third industry, military and federal spending, is up, which Ruane says will help to stabilize our overall market.

“There’s a good chance that Guam’s economic growth will experience a 1 percent decline compared to the previous year unless the combined consumer spending and business spending increases,” said Ruane, noting that business spending has decreased with foreign labor shortages as a result of H-2B visa restrictions a major contributor to that decline. “I say that because tourism, if your’e following my forecasting, tourism will be down, GovGuam spending will be down, federal spending will be up. If you look at the contribution of these sectors to our overall economy, they might cancel each other out. So what’s the silver lining? Where would growth come from? The local economy.”