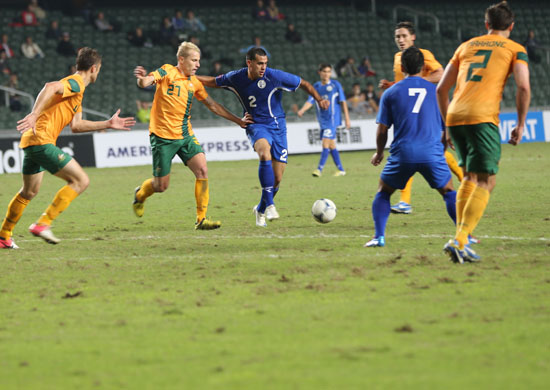 Guam – The Matao will take the valuable game experience from competition in the East Asian Cup Round 2 tournament to the island’s bid to win in AFC Challenge Cup qualifiers in March next year, Guam’s second appearance since 2006.

Guam’s national football team played its final match of this year’s East Asian Cup Round 2 tournament against FIFA No. 33 Australia, its fourth match in only seven days.

Earlier in the tournament, the Matao impressed Hong Kong fans and international media with a 2-1 performance against the host nation and a 1-1 draw against Chinese Taipei. Fans clamored to get autographs from the team after its 5-0 match against DPR Korea and applauded the Matao’s efforts in its first-ever match against Australia, a 9-0 loss to a team that included at least six players selected to play in World Cup qualifiers, as well as two players from Australia’s list of its top 10 international goal scorers.

[The Matao’s Shawn Nicklaw (No. 2) keeps back Australia’s Aaron Mooy as he prepares to send a pass to a teammate in a match of the East Asian Cup Round 2 tournament Friday at Hong Kong Stadium in Hong Kong. Guam fell to the FIFA No. 33 country, 9-0]

“It was a tough game for us for sure,” said Matao head coach Gary White in a post-match press conference. “Four games in seven days is extremely grueling anyway, but when you’re playing at the international level, it’s even worse, obviously … I can’t fault the players’ desire – the Australians came out from the beginning. They had to get the goals. This was probably the hardest they’ll play in the entire tournament and we just happened to be on the end of it.

“Anything we can take from this (tournament) will help us in the Challenge Cup (qualifiers) in March when we go for that. We can only grow from this experience,” White added. 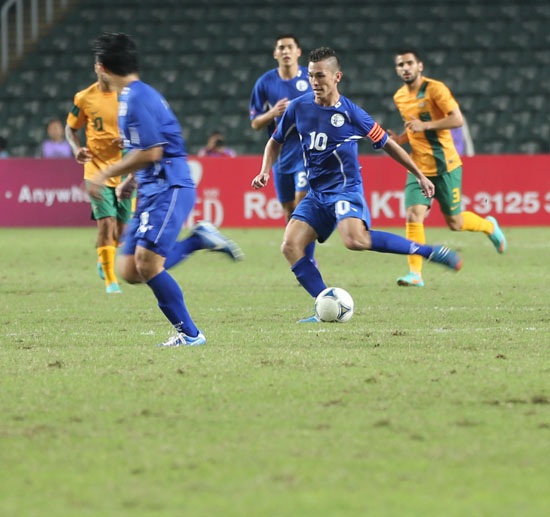 [Matao captain Jason Cunliffe directs a play in a match against Australia in the East Asian Cup Round 2 tournament Friday at Hong Kong Stadium in Hong Kong. Guam fell to the FIFA No. 33 country, 9-0]

Even before the opening whistle, Guam was at a disadvantage as two Matao starters, Travis Nicklaw and Scott Leon Guerrero, were suspended from play after receiving two yellow cards in three games. Additionally, midfielder Ryan Guy was out of the rotation following an injury from a previous game.

Minutes into the game, Joshua Borja exited following a hamstring injury on a defensive run for the Matao during the match. George Washington High School senior Dylan Naputi filled in for Borja, joining other high school students Christian Schweizer and T.J. Atalig who played the full match.

Aaron Mooy opened scoring for the Australians, taking advantage of a free kick in the 11th minute of the match. Australian forward Eli Babalj scored eight minutes later and teammate Michael Marrone tacked on one more goal in the 41st minute before halftime.

Australia’s Archie Thompson, who has played for his country 45 times and is No. 2 on the country’s list of players with most international goals with 28, entered Saturday’s match in the second half and finished with a hat trick. Australia’s other second half goals came from Babalj, Mark Milligan, and Richard Garcia.

Even with Australia’s clean sheet, the match wasn’t a fully defensive endeavor by Guam, as the Matao had opportunities to score throughout the match. Guam’s Mark Chargualaf, a substitute in the second half, found some space near the penalty box, but Australia’s keeper Eugen Galekovic picked up the shot. Captain Jason Cunliffe and Shawn Nicklaw took free kicks for Guam, but the team was unable to convert on the set-play opportunities.