Manila  – Chinese Taipei’s best defense was resorting to delay tactics to break up the Matao’s fast-paced attacking plays and emerge as victors with a 2-0 showing in Day 2 of the Philippines Football Peace Cup at Rizal Memorial Stadium in Manila, Philippines Thursday.

“We dominated large parts of the game, but we just couldn’t put our chances in,” said defender Christian Schweizer after the game. “Sloppy mistakes cost us the game.”

From the opening whistle, the Matao rattled Chinese Taipei’s defensive backs and goalkeeper, Pan Wen Chieh with quick games of possession in and around the midfield. Within the first few minutes, Schweizer shocked Chinese Taipei’s defenders with his speed down the left wing and sent a cross into the box to get Pan sweating early. From there, it was a barrage of through passes, left and right wing crosses and corner kicks into the box in just the first 10 minutes.

[The Matao’s Dylan Naputi attempts to weave through the defense of Chinese Taipei’s Tsai Hsien Tang (5) and captain Chang Yung Hsien (3) near the goal in a match of the Philippines Football Peace Cup at Rizal Memorial Stadium in Manila, Philippines. Chinese Taipei ran out the second-half game clock to emerge with a 2-0 victory]

As Chinese Taipei grew increasingly physical on plays, Lo Chi An was able to find the lucky strike in the 11th minute from the right side to the opposite post. In the final minute of the half, a defensive mistake cost Guam another goal for the eventual final score.

“After watching the Philippines and Guam game, we saw that Guam had a very strong team,” said Chinese Taipei coach Chiang Mu Tsai through an interpreter. “It was very fortunate for us to have been able to win the game.”

With the two-goal advantage, Chinese Taipei relied heavily on defense and began its strategy of delaying the game to break the tempo set by the Matao early on. Pan continued to increase his time sending goal kicks, prompting a few Guam players to count out loud, and eventually began sending them out of bounds. Others asserted injuries, but were back in playing mode after the team’s doctor jogged onto the field of play. In one instance, Chinese Taipei’s Yang Chao Hsun purposely kicked a dead ball away near the sideline when Guam was awarded a throw-in, prompting a yellow card.

“Some of it was just over the top and a little bit ridiculous to be honest, but that’s experience kicking in to try and run out a game when you don’t need to score another goal,” said Matao head coach Gary White when asked about Chinese Taipei’s delay tactics. 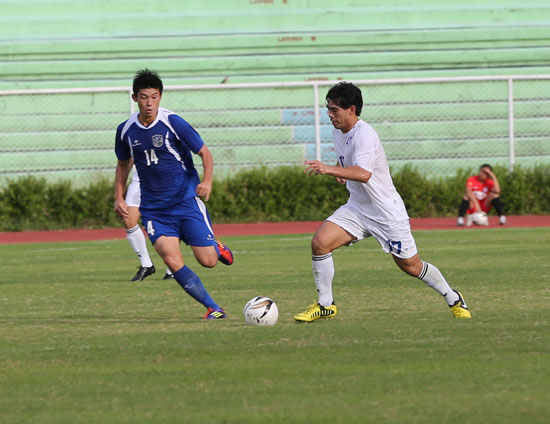 [The Matao’s Dominic Gadia carries the ball through the midfield facing some defensive pressure from Chinese Taipei’s Liu Chi Chao in a match of the Philippines Football Peace Cup at Rizal Memorial Stadium in Manila, Philippines. Chinese Taipei ran out the second-half game clock to emerge with a 2-0 victory]

“What the team needs to learn from this game is to put away chances and just kill off games. The team (today) didn’t know how to handle having total domination over its opponent and coming back from getting scored on in a counterattack. We just really need to stay focused, deal with any set backs and stay with the game plan. We are going to get it right before December,” White added, referring to the semifinal round of the East Asian Football Championships, where Guam will face Chinese Taipei a second time, Hong Kong, North Korea and Australia.

In the current tournament, Guam will next face a familiar adversary in Macau at 4 p.m. Saturday Manila time. The Matao defeated Macau 3-0 in July during the East Asian Football Championship preliminary competition.

In the day’s late game, the Azkals blanked Macau 5-0 behind a hat trick from Denis Wolf and a goal each from Carlos Martinez de Murga and Patrick Alcala Reichelt. The Azkals next play Chinese Taipei in the final match of the tournament at 7:30 p.m. Saturday Manila time.