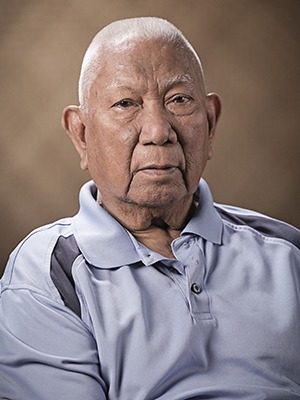 The island pays tribute to a war survivor, Marine, and friend to many – Jesus Camacho Babauta, who was Guam’s oldest Marine.

Babauta, who was fondly known as Uncle Chu to many, passed away earlier today at the Naval Hospital.

We had a chance to speak to Attorney Pete Santos, Babuta’s nephew, who was able to give us incite on the Oldest Marine’s life.

“This morning he passed away unfortunately, he was 94 years old. He was Guam’s oldest Marine, of course until this morning. So not too long ago, just a couple of months ago, my grandmother’s sister- his late wife passed away. So I guess they’re reunited now up in Heaven. So although we are going to miss him dearly, and he taught us a lot growing up – the whole entire family – we’re glad and happy that he’s back together with our Auntie B,” said Attorney Santos.

According to Guampedia, Jesus Babauta, who is from the village of Sumai, was around 13 years old when the Japanese invaded Guam in 1941.

Guampedia also stated that Babauta and his cousin were among a group of CHamorus who were taken from Manenggon to Fena – where they narrowly escaped death by the Japanese.

Santos told PNC about how his late uncle surivived during the Japanese occupation of Guam.

“It was just being able to hide things and be clever especially when dealing with the Japanese, because they were always looking for ways to punish you or to get you in trouble,” said Babauta’s nephew.

Santos, an Army veteran, says that his Uncle Chu, as well as other members of his family were some of his sources of inspiration when going into the military.

Saying, “When I did join the military, I thought about people like him and his daughter, Annette, who also retired as a Master Chief from the Navy as well. A lot of people like them… I would follow in their footsteps. So yes he was an inspiration, but me personally going into the military, I wasn’t trying to follow but they did – definitely, open the path.”

When asked about what word best describes his Uncle, Santos said that it was “Generous,” “Generous because not only generous in money or food or time. Because if you needed help, he would help you. But also generous in wisdom. Because that is one of the things – he was a story teller and he also had a lesson in every story. And he would also try to mentor all of us younger generations and teach us life lessons. So he was generous in everything.”

We at the Pacific News Center and the Sorenson Media Group extend our condolences to the late Marine’s family and friends.