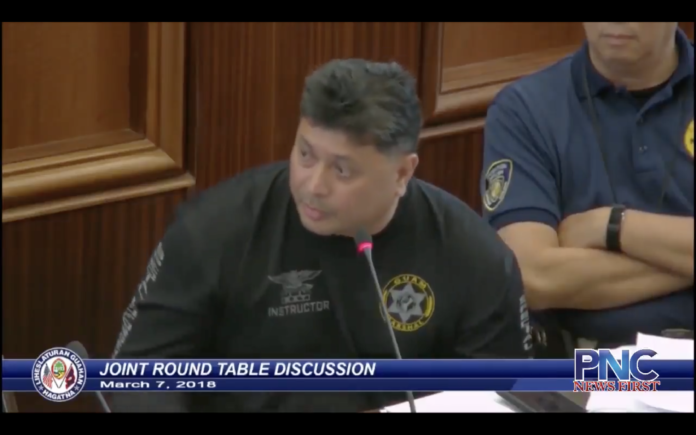 Senators met with members of the Superior Court, the Department and Board of Education, GPD, and the AG’s office to go over the gun violence awareness measures that are currently in place in the schools.

Vince Naputi of the Superior Court’s Marshal’s Division’s Training Staff said Marshals have trained about 14,000 people—10,000 of them from the public schools. He says School Resources Officers, or SRO’s, work hand-in-hand with the administration, and serve as mentors to the students in addition to being their trainers. Homeland Security Chair Senator Telena Nelson asked what kind of programs they have. Naputi described one pilot program in place where they go into schools, meet with students to show them a video and powerpoint and hold a demonstration to show students what a gun sounds like.

“The weapons demonstration. what do you mean by that,” asked public safety oversight chair Senator Telena Nelson.

“We fire off simulation rounds and they’re blanks. what it is is we bring it to the schools and we allow them to do what we call a shelter in place or a lockdown,” Naputi explained.

Naputi says those trainings are reserved for High school level students. Justice Committee Chair Senator Therese Terlaje asked for a copy of that training curriculum. Capt Kim Santos brought up the point that although the Marshal’s office conducts the training, GPD officers would likely be the first responders. Naputi agreed with Santos that the two departments should work together on those procedures.