Guam – The result of months of training by Guam’s U18 national soccer team will culminate this week beginning Wednesday during the 2013 EAFF U18 Youth Tournament at the Guam Football Association Training Center.

From over 30 training squad members, 18 of the top players were selected to represent Guam in matches against DPR Korea, Hong Kong, Chinese Taipei, Macau and the Northern Mariana Islands.

“We have prepared this group to play exciting attacking football, a great contrast to our playing style a couple of years ago,” said Dominic Gadia, Guam U18 national team head coach. “The GFA and our island have labored hard to get to this point of our football history and we now find ourselves in a tournament with expectations to win. This is a fantastic experience for our team because it means we now have standards to uphold.

“Success in this tournament will forever remain with these players and coaches. I hope this inspires our island to become an even more competitive footballing nation,” Gadia added.

“As the host nation of this tournament, Guam has a fantastic opportunity to showcase the development of football in our island,” Gadia said. “We are one of the fastest developing football nations in Asia and have experienced some of our best achievements in the last two years. This tournament will give us the opportunity to showcase a new generartion of Guamanian football players. These players will set the standard for the continued development of football in Guam.

“This team of players, coaches, and staff must realize that success in this tournament is bigger than just a trophy. For the players who make a positive impact in the tournament, they have the opportunity to go onto play football in college, professionally, and a call-up to the Matao,” Gadia added.

There is no admission fee to watch the games. Other than Guam’s 7:30 p.m. matches, other teams in the tournament will play at 5:15 p.m. on both the upper and lower turf pitches. Food and drinks will be available at concession stands. Funds raised through concession stand sales will benefit the U16 Boys national team and the U16 Women’s national team, both set to compete in regional tournaments next month. 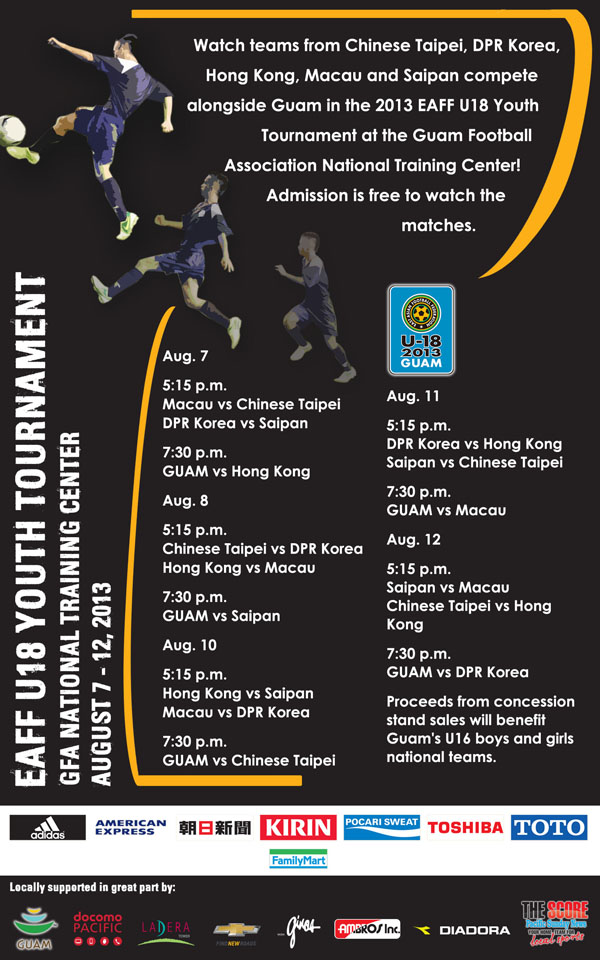 For more information about the tournament, call the GFA Main Office at 637-4321.