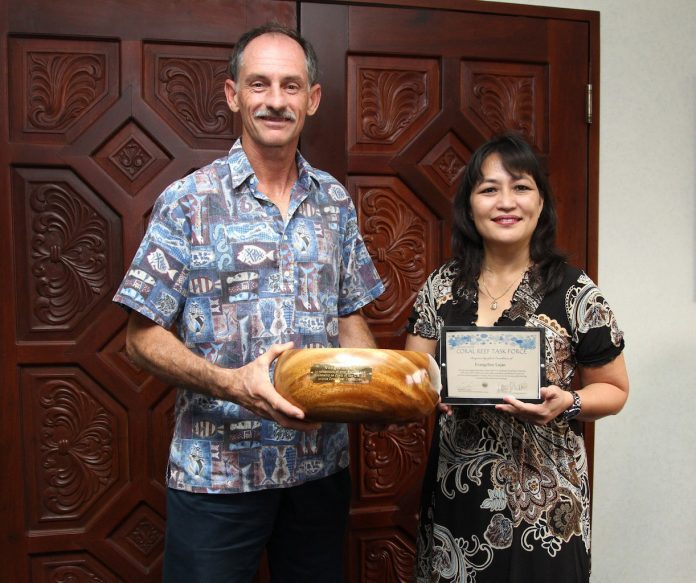 Guam- The U.S. Coral Reef Task Force has selected Guam Coastal Management Administrator Evageline Lujan for an award in Outstanding Management. The award is for her contributions as Chair of the All Islands Coral (AIC) Reef Committee and for her work as Secretary of the Steering Committee of the Micronesia Challenge.

The Coastal Management Program states Lujan “is recognized for her untiring efforts and outstanding contributions to the protection and conservation of coral reef ecosystems in Guam, Micronesia, and the United States. She has helped to significantly advance the management and understanding of these threatened marine resources, provided effective policy, public awareness, and a greater understanding of the human dimension of managing coral reefs.”

Her continued role as Secretary of the Micronesia Challenge Steering Committee also showed strong leadership to effectively conserve at least 30% of the near-shore marine resources and 20% of the terrestrial resources across Micronesia by 2020. This represents more than 20% of the Pacific Islands region. Lujan’s commitment has led to the protection over 480 coral species, or about 60% of all known coral species.

While Lujan received the award in Fort Lauderdale, Florida during the Task Force’s public meeting on October 17-21, the Guam Coastal Management Program will be conducting a small ceremony tomorrow, November 9 in her honor at 9 a.m..

The U.S. Coral Reef Task Force was established in 1998 to lead and coordinate efforts to address the threats facing coral reefs. The National Oceanic and Atmospheric Administration (NOAA) and the Department of the Interior also serve as co-chairs of this task force.