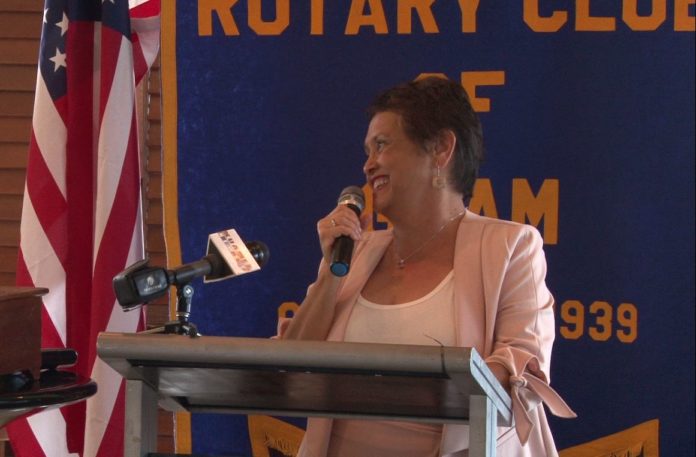 Guam – Gubernatorial candidate Lou Leon Guerrero spoke in front of members of the Rotary Club of Guam this afternoon, there, she presented her growth oriented economic policy plan.

Leon Guerrero wasted no time in presenting her plan, saying that her administration would repeal the sales tax set to go into effect soon.

Part of her plan for economic growth includes the formation of a tax recovery unit within the Department of Revenue and Taxation, to collect the over $200 million dollars in taxes owed to the government.

Citing the debt that has financed operations, Leon Guerrero states that her team would conduct a full assessment of public assets, liabilities, revenues and operations, to balance the books, reschedule long term obligations and liabilities and work to pay off our debt.

Leon Guerrero’s talking points included the emphasis on developing small businesses and encouraging entrepreneurship, going so far as to say that quote, “GEDA has lost their purpose”.

She ensured that every cent from the liquid fuel tax will go towards village road repairs, and stressed the importance of renewable energy.

“We will also take steps to fully utilize all federal grant monies, something that is not being done today. And, we will expedite the disbursement of bond proceeds earmarked for capital improvements. This is the proven way to help stimulate economic activity and expand our revenue base,” said Leon Guerrero.

Lou Leon Guerrero also filed her gubernatorial candidate packet earlier this afternoon, saying that she and running mate Josh Tenorio have spent the last 18 months talking to people and that they are ready to turn all the problems they hear about, around.