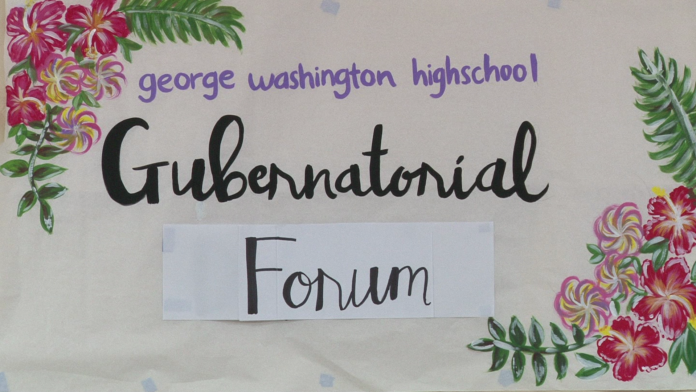 Guam – Gubernatorial candidates had another chance to go toe to toe during a debate at George Washington High School where they addressed a number of issues, but the one topic that seemed to stand out was raising taxes.

The debate was organized by GWHS students. Noticeably absent from this debate was Sen. Dennis Rodriguez’s running mate Col. David Cruz who Rodriguez noted was at work as a teacher at John F Kennedy High School.

Students took turns asking each candidate a question about a range of topics. Taxes, a controversial issue recently, was an apparent focus of the debate. Democrat Senators Frank Aguon and Dennis Rodriguez both had similar answers to this issue.

“We will go out and collect taxes so that we don’t have to increase any of those taxes to any of our cost of living in the government,” said Aguon. “This recent budget reduction out of the entire consideration, Mr. [Jon] Fernandez, the superintendent, committed to reducing the DOE budget by $12 million for the balance of the fiscal year. That is a lot of money coming out of your education.”

“I would repeal what was just passed recently which is the increase in the GRT from four to five percent. I would also increase and I will support the initiatives now before us that would repeal the sales tax. I voted against these two because I know we’re not doing enough. I’ve said from the beginning, if we are going to tax our people more, let us collect what is due to the government first,” said Rodriguez.

Former Democrat Governor Carl Gutierrez answered questions about healthcare, proposing to fire the Guam Memorial Hospital Board of Trustees and revert GMH into a line agency.

“So as governor, the first thing I’m gonna do is take that prioritization of healthcare and get rid of that board and put it where the buck stops at the governor of Guam and I’m going to take the first instance to the Guam Legislature to say fully fund this as a regular line agency,” Gutierrez proposed.

Former Democrat Sen. Lou Leon Guerrero talked about her qualifications to become governor, priding herself as someone who has experience in many different sectors, from healthcare, public and the private sectors.

“My experiences as a nurse, as a senator and as as businesswoman are experiences, life experiences that I think will meet the challenges of our people here. The fiscal house of our government is in bad shape. I will use my financial experience to turn that around,” she said.

There were also some subtle jabs during the debate, particularly aimed at the Tenorio-Ada camp. Republican Lt. Governor Ray Tenorio focused on the work that the Calvo-Tenorio Administration has accomplished over the last seven years, saying they’ve created more jobs, increased graduation rates, hit record numbers in the tourism industry and have grown the economy.

“We’ve improved the economy by almost a billion dollars in the last 10 years. We’ve grown this economy from a $400 million operating budget in the government of Guam to almost $900 million. We’re gonna have a billion pretty soon,” asserted Tenorio. “We’ve had record years for the three last years. We’ve had the gross domestic product grow and household incomes grown as well.”

When it was his turn, Gutierrez used the opportunity to highlight the work of his administration.

Leon Guerrero added to that: “We are more in debt than we are in revenues, we don’t collect our taxes, yet we raise the taxes.”

Of the 10 candidates, at least three of them are GWHS alumnis: Sen. Aguon’s running mate Alicia Limtiaco, Former Governor Gutierrez and Lt. Governor Tenorio. Sen. Aguon pointed out that his wife and daughter graduated from GWHS as well.