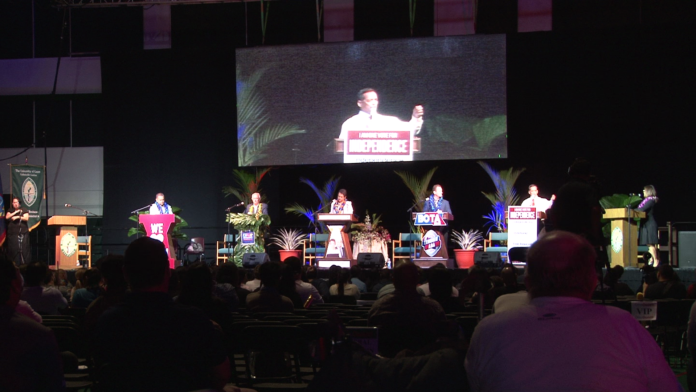 Guam – In the first gubernatorial debate held last night, the five gubernatorial candidates envisioned how their respective administrations would handle not only self determination, but also how they plan on preserving and developing Guam’s natural resources and how secure they feel Guam would be during the transition period to whichever political status the territory eventually chooses.

Each of them supported the right to self determination, with Gutierrez saying he’s been working on this for the past five decades and outright calling for independence.

Rodriguez lent his support to his “che’lus” in this fight. Aguon claimed that decolonization is a fundamental human right. Tenorio called for the native inhabitants of Guam to right the wrongs created generations ago, stressing the importance of self determination, while Leon Guerrero also stressed the importance of being ready to live with whichever status we choose.

The debate was organized by the graduating candidates for the University of Guam’s School of Business and Public Administration in partnership with the Regional Center of Public Policy and the Guam Commission on Decolonization.

If you missed that debate, you can still watch it on our PNC Facebook page.