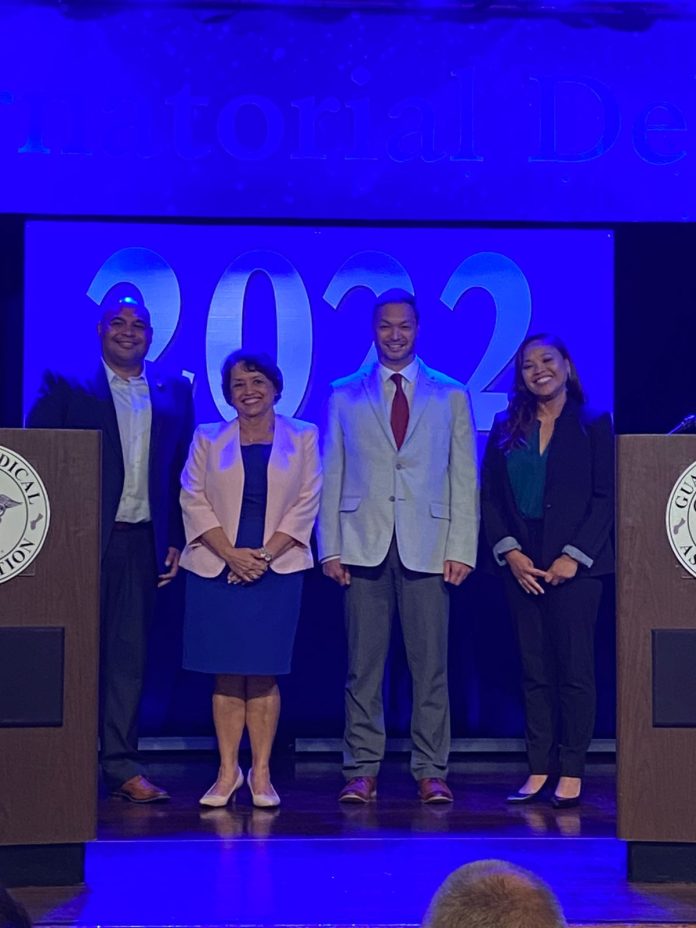 Coming off of the heals of the opening of early voting registration – The Guam Medical Association hosted a Gubernatorial Debate between the two Democratic tickets of Leon Guerrero-Tenorio and San Nicolas-Matanane.

Guam’s most prominent healthcare issues were discussed by the two candidates on the Democratic ticket.

A stark contrast in opinion is shown from the start.

“Now imagine if this administration put more focus on fixing those problems instead of fixing an election.”

On the other corner, Lieutenant Governor Josh Tenorio:

“The leader of my opponent’s team could have done his part as a Congressional delegate.”

Topics both teams faced included: the funding of the hospitals, access to healthcare, and disease control to name a few.

The Leon Guerrero-Tenorio team highlighted the efforts they have done in their term — citing their accomplishments through the pandemic.

The San Nicolas-Matanane team drew from their potential to improve the “shortfalls” of the current administration.

Congressman Michael San Nicolas said, “We need to ask a very direct referendum question. ‘Do you want your local government to pursue pro-choice or pro-life policies.'”

The debate also hosted a platform for topics unrelated to healthcare.

In the climactic 3rd Round of the Debate, the Congressman’s ethics investigation briefly became the topic of interest after Leon Guerrero was asked about Bill 317 — a bill to publicize a physician’s legal standing in line with their profession.

Heavy with emotion, Congressman San Nicolas said, “Unsubstantiated claims have no business being put out there in ways that it’s going to be harmful to you or your families. No business.”

In her rebuttal, Leon Guerrero stayed on the topic of the investigation, emphasizing that the findings of the Congressman’s investigation were substantiated.

Claims by one of the candidates were met with criticism by Public Health’s Zennia Pecina.

Matanane claimed that vaccinations are currently made available for one hour a day, but Pecina described the contrary in an interview with Newstalk k57’s Patti Arroyo.

“That is absolutely false.”

In interviews with PNC’s Damen Michael, both Governor Leon Guerrero and Congressman San Nicolas felt good in their delivery of information and promises moving forward and are both confident of their chances in the upcoming election.