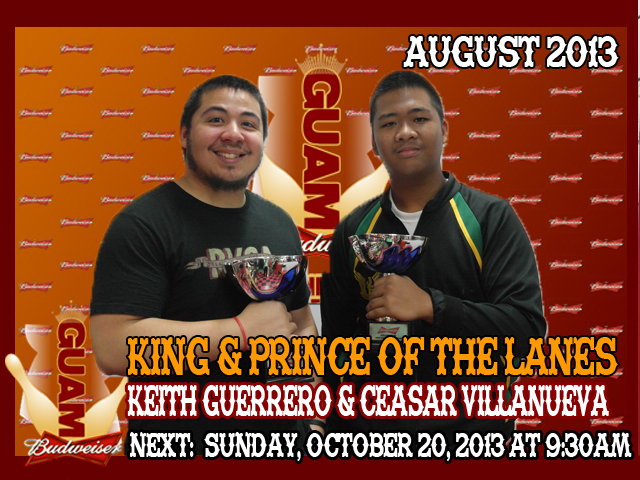 Tamuning, Guam – Keith Guerrero connected a barrage of strikes during the monthly finals of the Budweiser King of the Lanes to give Ricky Duenas a taste of his own medicine and earn his second title of the year.  Guerrero put together 10 strikes in a row as Duenas was only able to match his sixth frame with a final score of 287-151.  Duenas seemed like he was on his way to claiming his second title as he also duplicated the feat in the semi-final round against fellow National Team player and top seed Jay Leon Guerrero 289-214 and stringing eight in a row in the quarter finals against Tim Nauta for a 264-208 victory.  Guerrero outplayed Jim Pinaula 226 to 203 to set up the finals match.

Cesar Villanueva upended both top and second seeds on his way to laying claim to his second Prince of the Lanes title of the year.  Villanueva opened a lead on top seed Von Cabral from the onset of the match and never looked back as he cruised to a 213-186 victory.  In the semi-final match Cabral dismissed Juan Blas 199-139 while Villanueva ousted 2nd seed Jeremiah Camacho 190-172.

The next Budweiser King and Prince of the Lanes will be held on Sunday, October 20, 2013 at 9:30 a.m. at the Central Lanes Bowling Center.