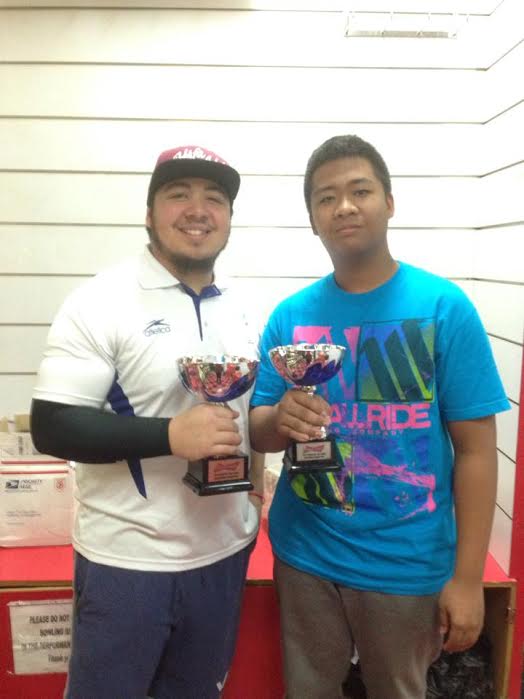 Tamuning, Guam – It was like August again as Keith Guerrero and Cesar Villanueva repeated their victory during the Budweiser King and Prince of the Lanes held on Sunday, November 17, 2013 at the Central Lanes Bowling Center.  With the win Guerrero earns his third title for the year while Villanueva won his second.

Before Guerrero was able to lay his hands on the trophy, 2nd seed Greg Borja gave him a run for the cup sending the game into extra frames as Guerrero flagged a single pin leave in the last frame against a spare strike combination by Borja to finish the regulation match with identical scores of 197.  The match went into extra frames of which Guerrero out pinned Borja 39-27 for the victory.  Guerrero out played 6th seed Brian Manibusan in the semi-final match 215-167 while Borja edged 8th seed Manny Tagle 196-192 to set up the monthly finals.

Villanueva ousted 4th Jared Gutierrez in the monthly finals using his handicap advantage to claim his second title.  Gutierrez 171 game was not enough to overcome the ten pin advantage held by Villaneuva as his 167 game with 35 pins of handicap was six points better than Gutierrez 196 total with 25 handicap.

Top seed Villanueva’s handicap came in handily throughout the course of the tournament as he beat 5th seed Ken Duenas in the semi-final 189+35 to 192+18 before winning the monthly title.  Gutierrez upended 2nd seed Von Cabral whose three month second place finish came to an end 177+25 to 164+21.

The Grand Finals will feature the monthly champions for the year 2013 along with the defending champion of which 16 competitors from each division will compete for the titles of Budweiser King and Prince of the Year on Sunday, December 22, 2013.