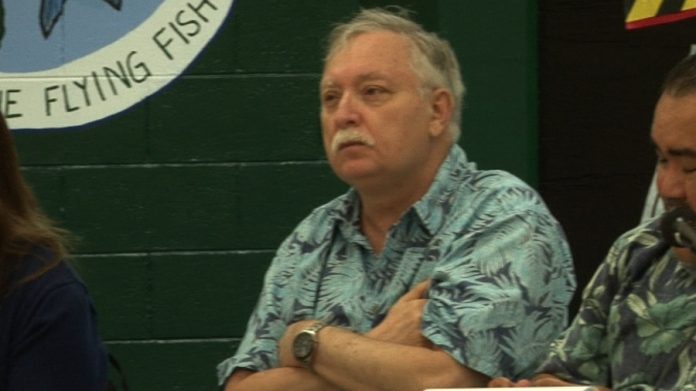 Attorney David Lujan is demanding that the GEB chairwoman retract her statement she gave to PNC about the scheduling of Fernandez’s public hearing.

Lujan demanded a retraction from education board chairwoman Lou San Nicolas who told PNC in an earlier interview that Lujan was consulted for the scheduling of Fernandez’s public hearing.

“This is completely false,” Lujan said in a statement released to the media. “I never agreed that the hearing date would be set for 9 am on November 21 and last for only two hours. Attorney Gary Gumataotao set the hearing date, time and duration without any prior notice to me that he would do so.”

PNC: “Are you saying that you did meet with him and you guys did discuss this hearing date?”

“Oh no, we’ve met and met and met and met and talked about a lot of things with the case … it’s not like David said, ‘I agree to this date and time.’ What David said was, ‘I’m not available in October, maybe November,’ or, ‘Let’s try November,’ something like that. In other words, he pushed it into November and I said, ‘ok, fine,'” explained Gumataotao.

Gumataotao clarifies that the hearing date was set by the board chairwoman, as outlined in board policy, but with input from Gumataotao and the acting superintendent.

PNC: “Is he required to be noticed?”

“We’re not in court. It’s not a court … He needs to be noticed so he knows where to be,” said Gumataotao.”I mean imagine telling a judge, ‘I’ll come when I want to or when I’m free.’ It doesn’t quite work like that.”

Lujan, in his statement, went on to say “I demand that the chairwoman retract her false statement. If she is lying, her recklessness with the truth does a disservice to the community and unfairly prejudices my client.”

“But he did give his input and that’s why we didn’t do it in October. They would’ve done it right away because they wanna get it done,” noted Gumataotao. “Along the way, I think there’s been some kind of misunderstanding where people–he’s thinking that we’re saying that he had a say in every aspect of it. No, he did not.”

You can read lujan’s full statement below:

Chairwoman Lourdes San Nicolas informed PNC News that “the date and time [for the November 21 hearing] was not unilaterally decided by one person, rather, with input from board Attorney Gary Gumataotao, who also consulted with Fernandez’s legal counsel, Attorney David Lujan.”

This is completely false. I never agreed that the hearing date would be set for 9:00 a.m. on November 21 and last for only two hours. Attorney Gary Gumataotao set the hearing date, time and duration without any prior notice to me that he would do so.

Given these facts, either the Chairwoman is lying, or she is being misinformed by her legal counsel. The latter appears possible, as I have just received a letter from Attorney Gumataotao in which he contradicts the Chairwoman’s recent statement that a hearing officer will be present. With less than 5 days’ notice, Attorney Gumataotao has finally responded to my inquiry and states that no hearing officer will be present.

I demand that the Chairwoman retract her false statement. If she is lying, her recklessness with the truth does a disservice to the community and unfairly prejudices my client. Anything but a full retraction of her statement would expose the incompetence and ill intentions of a Board that has allowed this process to run amok. If she refuses to retract her statement I will have no choice but to press the matter and hold her accountable for willfully, publicly misrepresenting the truth.