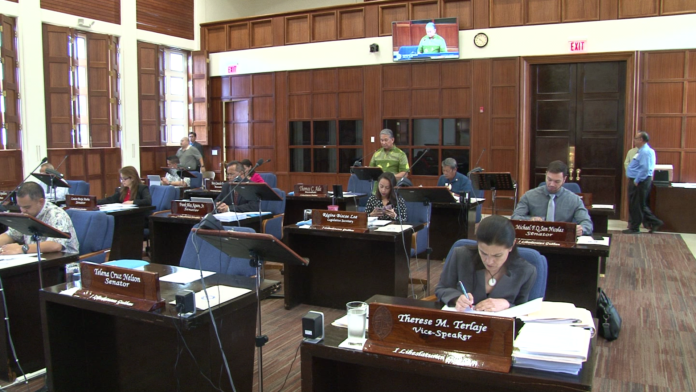 Guam – Did you know that Guam does not have a law to charge an individual with a felony if that person disarms a law enforcement officer — but that in the United States such an act is classified as a felony and the person can serve up to 10 years behind bars depending on the state?

It appears that Guam is behind the legislative curve when it comes ensuring that individuals who grab an officer’s gun are dealt with appropriately by law. To date there is no law making the act of disarming a law enforcement officer of their duty weapon a felony charge.

But Senator Telena Nelson is hoping to change that with Bill 324 an act to criminalize the disarming of peace officers.

The legislation was introduced on July 16th about a week after the Lieutenant Governor of Guam and Czar of Public Safety Ray Tenorio grabbed Police Officer CJ Cruz’s gun six times at the Barbeque Block party in Tumon amidst hundreds of people.

While no one is above the law, court documents indicated that officers present during the incident recalled Officer Cruz explaining to the Lt. Gov. “that he was not escalating the use of force because it was the Lt.” Gov. Senator Nelson’s bill points out that disarming a peace officer elicits a response from the officer to retrieve the weapon and could result in the harm of the concerned individuals or those in surrounding areas.

According to the bill a person commits the crime of disarming a peace officer if such person intentionally removes, attempts to remove a firearm, deadly weapon or less lethal weapon used in the performance of his or her official duties from the person of a peace officer while such officer is acting in his or her scope of duties.

But what about intent? As you may recall the Lt. provided reason for his actions.

“I never imagined this intention that was well intended to try to help protect the officer and the public would be blown out of proportion to this extent,” expressed Tenorio.

Court documents indicate that Chief of Police Joseph I. Cruz. Cruz on the night in question he had received a phone call from the Lt. Gov. wherein the Lt. Gov. had indicated he had seen an unsafe situation and was able to remove a firearm from a police office.

“The Lt. Gov. expressed that he would rather address the incident among them and not someone outside public safety,” allegedly stated Tenorio.

Court documents state that the “Lt. Gov. indicated he had a concern and acted on it.”

But according to the proposed legislation, the only time the law does not apply is when the individual does not know that the person disarmed was a peace officer or if the peace officer was engaged in an incident involving felonious conduct at the time of disarmament.

Whether or not the Lt’s intentions warranted the act will be decided upon in court.

But as the bill goes before the legislature for a public hearing on Wednesday, we must remind the community that the Lt. Governor’s gun grabbing incident although highly publicized is not the first time an individual on island disarmed a police officer.

You may recall, in 2015, murder suspect Dumitru Lobanov grabbed an officer’s gun from its holster while he was being processed at the Hagatna Precinct. Lobanov then aimed the weapon at police officers before turning the gun on himself and firing.