Friday morning, family, friends, and fellow warriors once again gathered to remember and honor the memories of the four fallen Soldiers, in a private and solemn ceremony, albeit, under a virtual cloud of mourning for two other Soldiers recently killed in action in Afghanistan.

The ceremony was attended by family members and friends of the four Guam Guardmembers. Fellow Soldiers, Airmen and civilian employees in the Guam Guard also joined in the commemoration, taking turns at the end of the ceremony to render a proper salute or whisper a short prayer.

SGM Mark Ishmael, who was Fejeran‘s recruiter, remembered his time of service with Fejeran and Fernandez while in the Horn of Africa.

“They were no ordinary Soldiers by any measure. I could tell you that they were motivated, competent, mission-driven men who represented their country, their island, and people with honor and distinction. Majority knew that,” he said.

“I will always remember Greg with a smile on his face and music in his heart. There was never a bad day when Greg was around… For Chris Fernandez, his very presence made you feel safe… He made you feel safe with his warmth and his attitude that knew everything was going to be alright,” Ishmael remembered.

MAJ Manny Duenas, who was Executive Officer for Alpha Company, 1st Battalion, 294th Infantry Regiment, the unit Leon Guerrero and Mora deployed with, also reminisced about his time with his two Soldiers.

“I could see the love he had for life and the dedication he had for his family and the Guam Army National Guard.  SGT Leon Guerrero was a confident, quiet individual who was unwavering in his commitment to Alpha Company’s mission.  He did what was asked of him, no matter how daunting the task.  He made the other leaders of the company proud to have served with him,” Duenas said of Leon Guerrero. 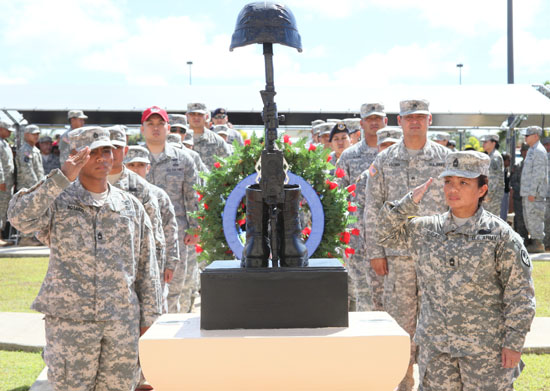 [Soldiers and Airmen line up to conduct their solemn salute in honor of fallen Guard members during the annual Fallen Heroes Memorial Ceremony held at the Guam National Guard’s Barrigada Army Readiness Center.]

About Mora, Duenas recalled, “I spent my deployment on the same (Forward Operating Base) as SGT Mora, and I can tell you this, he was very much loved by his fellow Soldiers.  He willingly went with his platoon on patrols as they worked to make Ghazni district a better place than they found it.  They were able to accomplish this and earned the respect of the other units in Ghazni.”

Throughout and after the ceremony, the quietness lingered, even as uniformed personnel began packing up equipment and other attendees slowly slipped away.

The two most recent Guam Guard losses, SGT Eugene M. Aguon of Mangilao and SPC Dwayne W. Flores of Sinajana, were killed May 16, in Afghanistan’s capital city of Kabul, when their convoy was attacked by a Vehicle Borne Improvised Explosive Device.  They were from the 1-294th IN RGT, assigned as Task Force Guam, working as part of the NATO Training Mission-Afghanistan (NTM-A), International Security Assistance Force, which supports the government of Afghanistan in developing and sustaining the Afghan National Security Forces.

The memorial, sitting at the entrance of the JFHQ, consists of a bronze inverted rifle display, atop a three-foot high latte stone pedestal. A large bronze plaque adorns the front side of the pedestal inscribed with the dedication of the memorial to the Guam Guard’s Fallen Heroes. On the left and right sides of the pedestal are two smaller bronze plaques with the names of each of the four fallen Guam Guard members.

The Latte Stone has become a traditional icon for Guam. It looks like a pillar capped by a hemispherical stone capital with the flat side facing up. The structure was used as building supports by the ancient island inhabitants, called Chamorros. These stone pillars are found throughout most of the Mariana Islands.