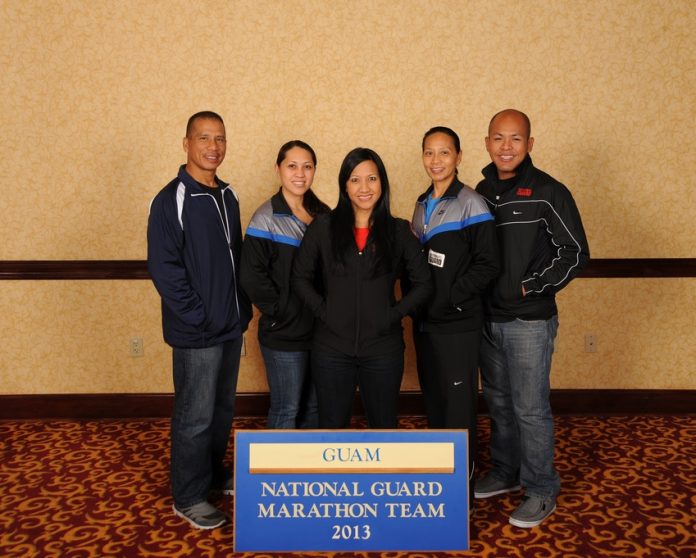 The three Airmen and two Soldiers were part of 200 Army and Air National Guard members representing 44 states and two U.S. territories, who were all competing for positions on the All Guard Marathon Team.

Unseasonably cold temperatures opened the race which saw more than 10,000 marathoners participating in the popular race.  The weather was definitely a challenge for the Guam Guard runners, according to team leader MAJ Esther Aguigui.

“Despite having to run in 40 degree weather, the team did outstanding. Also considering that we never trained in this type of weather,” Aguigui said. “All runners completed the mission with no injuries, improved running times, and a renewed motivation for next year’s Lincoln NGB Marathon.”

The five runners, who have collectively logged a total of 3,358 miles, started training for this race in August 2012, according to Aguigui. Training consisted of short distance running on weekdays, three days a week, and some long distance running on weekends. Also, for two days out of the week, the marathoners would conduct cross training workouts such as swimming, weight lifting, or aerobics. They do commit two days in the week for rest and recovery.

For Senior Airman Roby Garrido, who established a personal record of 3 hours, 38 minutes, running was a way to help him lose weight and stay disciplined.

“When I weighed 344 pounds, my idea of a diet and exercise program was eating just a meal and running.  Now I understand the importance of eating right and staying active. There’s no magic diet. Running was definitely not for me. But as the weight came off, the ability to stay consistent became a challenge.  So a half-marathon became the goal… Now I have completed over seven half-marathons.”

Garrido, from Inarajan, is with the 254th REDHORSE Squadron and cites runner Frank Shorter’s quote as a personal inspiration. “It doesn’t matter whether you cross the finish line first or last, when you cross that finish line it’ll change your life forever!”

Staff Sergeant Tara G. Taitano, 254th Forward Support Squadron, from Yigo, only started running about five years ago, although she was a cross country runner in her middle school years. She credits her parents, long-time island runners Christine and Joe Taitano, as well as fellow Airman TSgt Barbara Tayama, as the ones who encouraged her to pursue long distance running.

Taitano completed the race in 4 hours, 9 minutes. The motivation to succeed as a runner, according to her, comes more from inside her.

“No training could ever be done without the great support system that I have in my family and in my running group… Every runner has a story and a motivation. There’s something spiritual about hitting the pavement and setting out for your next (personal record) or accomplishing your next race. And when I thumb through the numerous articles and read about the successful running history my parents had, it motivates me to set out and create my own history.”

Master Sergeant Jaclyn N. Paulino, also with the 254th FSS, said her family, friends and team members were her inspiration to run a marathon. She finished in 4 hours, 30 minutes.

“My family has been supportive and encouraging throughout these years since I first began to run.  They are the driving force that mentally pushed me over the hurdles I faced and helped me overcome challenges as a runner.  Running has now become an addiction.  It is like morning coffee that helps me with deal with daily stresses and rejuvenates my emotional wellbeing.”

“The ultimate inspiration is the feeling of crossing the finish line after hours of running and countless hours of training to get to the 26. 2 mark. The feeling is indescribable and very powerful,” Paulino added.

“The most important thing I have learned from CW2 Dela Cruz, is that before you even attempt to run a marathon and complete it, you must first be able to run and complete it in your mind, which is by far the hardest part of training for an event like this.  It will also be, in most cases, the only deciding factor to determine if you will complete this goal or not.”

“There are basically three reasons I have developed as my training principles for why I am still running the marathon,” Mariano noted. “First is to represent my family and values.   Secondly, because as long as I am still physically and mentally able to.  Thirdly, is to represent our beautiful island of Guam and its’ people.”  He finished in 4 hours, 16 minutes.

For team leader Aguigui, commander of the GUARNG Element, the responsibility of leading the Guam Guard team to this year’s race was exciting.  She ran the half-marathon portion of the race, completing it in 2 hours and 34 minutes.

“The combined wealth of experience from this year’s team resulted in improvements in personal records and an increase in team participation in two marathons in a period of six months with no injuries. This year the key to our success is the command-approved weekly team runs during weekends that averaged 13 – 15 miles at a time. These team-building events allowed each runner to focus on individual improvements, and at the same time, establish baselines for team goals.  Our greatest strength was trusting God in every step we took. We depended on each other for mentoring, motivation and inspiration.”

“(Running a) marathon is a state of mind,” she added. “Months and months of physical, emotional, and mental fitness training unite to conquer 26.2 miles in the least amount of time humanly possible. Fast or slow, it’s all about the challenge; the fascination…the mystery of the amazing human body.  Many people spend too much time wondering if they can run a marathon, while the rest of us will spend the rest of our lifetime knowing we have.  Advice to running enthusiasts is to recognize personal convictions of artificial qualifications and foster a positive training environment.”