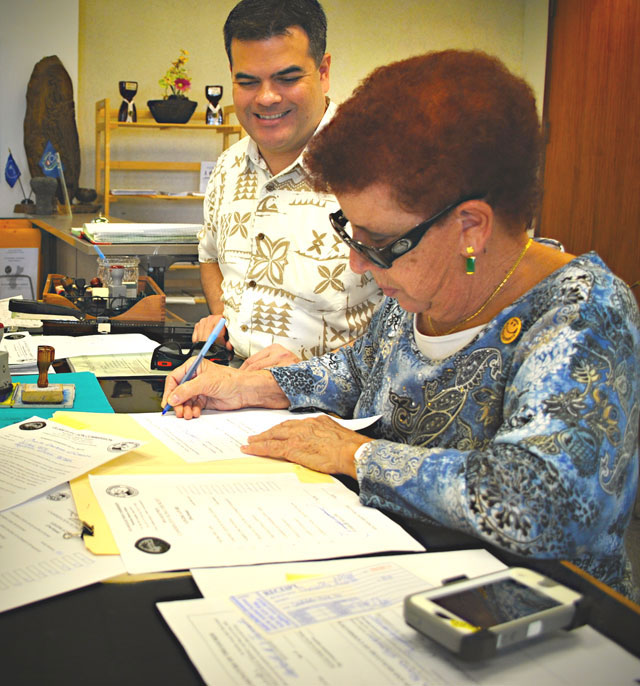 Former Guam Senator Judi Guthertz this morning filed all the required paperwork with the Guam Election Commission to make a run for the Legislature.

In a release, Guthertz said the focus of her legislative agenda will be on:

Guthertz was a member of the 31st Guam Legislature, but lost her bid for re-election 2 years ago.

READ the release from candidate Guthertz below:

Known as “Dr. J” by thousands of University of Guam students and graduates, Dr. Guthertz was raised on Guam from her infancy by an island business family. Her parents, Harry and Josephine Guthertz, are remembered for starting Guam Dry Cleaners, the Guam Department Store, Agana Variety, the New Emporium, and the A&W Root Beer Drive-In Restaurant chain.

Dr. Guthertz started school at Wettengel Elementary and graduated from the Academy of Our Lady of Guam.  She did undergraduate and graduate higher education studies on scholarships as a foreign student at the University of the Philippines where she obtained a BA in Speech and Communications, an MA in Mass Communications, a Masters in Public Administration and a Doctorate in Public Administration and Public Policy.  She is also a graduate of the DPS Police Academy (Reserve Police Officer Cycle), the FBI Executive Development Program for Chiefs of Police, the FBI’s Citizen’s Academy, and the UOG Fast Track Teacher Certification Program.

Growing up in a family business environment, Dr. J learned at an early age to value the importance of hard work and service to the community.  Her public service career includes Professor of Public Administration and Criminal Justice at the University of Guam and Vice President of Academic Affairs and Acing President at the University of Guam. She also served Guam as Director of Public Safety, Acting Chief of Police and as a Police Reserve Officer.  In a civic capacity, Dr. Guthertz served as a Vice President of the Guam Constitutional Convention, as an elected member and Chair of the Board of Education, as an elected Commissioner of the Consolidated Commission on Utilities, and as the Public Information Officer of the Statehood for Guam Organization and Task Force. She previously served three terms as a Senator in the Guam Legislature. During the recent 2013-2014 academic term, Dr. Guthertz served in the trenches of the Guam public school system at Untalan Middle School as a certified ESL/Social Studies teacher and as an Adjunct Professor at UOG and GCC. She is also a current board member for the Guam Visitors Bureau and has been focusing on initiatives to safeguard tourists visitng Guam.

In seeking a Senatorial seat in the next Guam Legislature, Dr.Guthertz’s legislative agenda  will focus on enhancing the quality of life for all of  Guam’s residents by 1) reducing crime, 2) helping Guam’s public and private school community and higher education institutions, 3) providing more  affordable education  and training opportunities for island residents, 4) supporting Guam’s veterans, and military community, 5) offsetting utility rate increases for Guam’s consumers, 6) abolishing unneeded laws and unnecessary government regulations, and  7) enhancing the business and tourism investment environment for small and large enterprises in oder to create good paying jobs for the people of Guam.