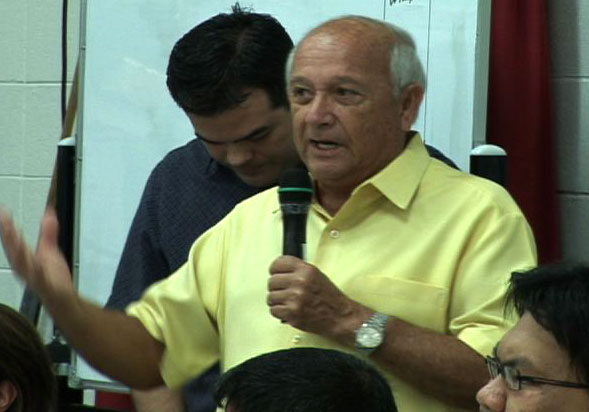 Guam –  Former Governor Carl Gutierrez spoke at a meeting of  the Democratic Party’s Central Executive Committee Thursday night in Sinajana. But he did not officially declare himself a candidate for Governor, as many there had hoped.

The 2 term Governor entered the meeting to a standing ovation but it wasn’t long before he made it clear that he was not yet ready to officially enter the race saying “As I’m formulating whether I should run again,  this is the most difficult time in my life. I still have some conflict in my home.”

Yet, he also made it clear that he wants to run. “My wife and former First Lady, Geri Gutierrez, has relented because she knows she can not stand in my way.”

“So I’m looking at it very seriously,” he said, adding that “Mr. Gumataotao would be an ideal running mate…he has acquiesced to the idea of he and I coming together as a team.”

He encouraged each of those in attendance to pick up a petition and get the signatures necessary to file, and then he proposed “we come back on the 19th with Gary and we seal the deal.”

Throughout his brief, un-scripted remarks, Gutierrez spoke like a candidate for office.

“Over the last several months … we have been on pins and needles to move our party forward”, said Gutierrez.

“Are we going to abandon it [the party] ? Or are we all going to come together and figure out .. how our island should progress forward?” he asked.

Referring to the Calvo-Tenorio team he said “They want to go on the idea that ‘I already gave you the refunds.'”  But he warned, come October “I think its $98-million dollars to start retiring the bonds. And as that progresses we’re going to look back and say ‘What did we do?'”

He talked about the series of typhoons and budget woes he faced when he was in office saying “we made it work, with half of  [the budget]  … this Administration has now.”

On the high cost of power and water service he said “Its easy to just raise the rates .. and sit back and the people of Guam are the ones pay for it.”

“So what am I standing here for?”, asked Gutierrez, “Its the idea that something has to be done to take care of the people’s suffering”, he answered.

READ the statement from the Democratic party below:

Statement from the Democratic Party of Guam

In a packed Sinajanja community center tonight, the Democratic Party Central Executive Committee unanimously voted to encourage the team of Governor Carl Gutierrez and attorney Gary Gumataotao to run for Governor and Lt. Governor under the Democratic party banner. The CEC also expressed its confidence that with the support of the party the Gutierrez/Gumataotao team will be victorious in November.

Democratic State Chair Sen. Rory Respicio stated, “From tonight ‘s enthusiastic reaction, it is clear that the team of Gutierrez/Gumataotao will have the full support of a united Democratic Party, disaffected Republicans and independent voters and will offer a strong  and clear alternative to the current Administration. Democrats throughout the island are energized and ready to work hard for victory in November.”