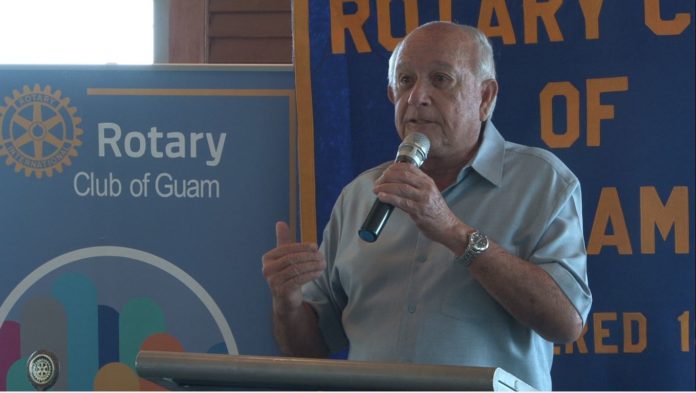 Guam – What you see is what you get. Speaking in front of a Rotary Club meeting, Gubernatorial candidate Carl Gutierrez says that what Guam needs is not nice commercials but rather, experience.

Gutierrez spoke on his collective vision for the sustainability of Guam’s economy. If elected he will network in D.C., where he says the resources are.

He also highlighted his Vision 2001 program, as it established more fiber optic cables in the region, than in any place else in the world.

He appealed to the business community, as Guam will have to rely on the strength as well as the wealth of the businesses to relieve the island of debt.

Gutierrez says that with his administration he would call upon businessmen to go over the real financial state of the island, giving them a carte blanche to find solutions.

When asked to comment about the unfounded mandate of Compact Impact and the real costs, and recovery of that cost, Gutierrez had this to say.

“The Compact Impact, the Compact Impact is a problem, a problem because we are not taking into account the positive impact those people give to our economy. And so, the federal government says listen, don’t just give us the negative impact, what about the positive? So, nobody has ever come up with a formula, including the Interior Department, to all sit down, and come up with a formula to say, this is what we agree, and whatever comes out, the federal government will adhere to it and pay it,” said Gutierrez.

Gutierrez says that he will prioritize health, public safety and education, in that order.