Guam – Guam Congresswoman Madeleine Bordallo and former Guam Governor Carl Gutierrez put on a show of unity last night at a Democratic party rally called to drum up support for an override of the election reform measure vetoed by Governor Eddie Calvo, Bill #413.

In a release describing the rally, Majority Leader Senator Rory Respicio highlights the reconciliation between Bordallo and Gutierrez saying that the pair are united in their support for an override.

In addition, Respicio’s release states that:

“Governor Gutierrez was gracious, thanking Congresswoman Bordallo for her commitment to election reform, and for responding positively to the Party’s request for a Congressional investigation into the allegations of voter fraud and electioneering in the Guam Election Commission’s
own findings of illegalities and irregularities surrounding the 2010 general election.”

However it is not clear that the Congresswoman has “responded positively” to a request for a Congressional investigation into “allegations of voter fraud and electioneering” in the 2010 Guam general election.

A statement from Bordallo’s office to PNC News merely acknowledges that she “will consider the request and make an official inquiry with the U.S. Attorney relative to the disposition of the complaint, and ask the U.S. Attorney to respond and take appropriate action.”

It makes no mention of a Congressional investigation. PNC’s has requested clarification from Bordallo’s office. No response had been received as of this posting.

However a party leader present at the meeting told PNC News say that in addition to committing to asking the U.S. Attorney about the report,  Bordallo also agreed to seek Congressional assistance, if the Guam’s U.S. Attorney failed to address the report.

The Tuesday night Democratic Party meeting was called rally support for an over ride of  the vetoed Bill #413. The measure would revise Guam’s election laws and audit ballots that were not counted in the 2010 election. Governor Calvo vetoed the bill because of that audit.

The measure was approved along partisan lines with 8 democrats voting for it and the 6 republicans voting against it. Senator Tina Muna-Barnes who was absent for the vote has declared her support for the bill,  but that still leaves the democrats one vote shy of the 10 they need to override the Governor’s veto.

The Thursday Legislative Session has been cancelled because Senator Ben Pangelinan is leaving island to seek medical treatment in the mainland. Speaker Judi Won Pat says the session will be re-scheduled once Senator Pangelinan returns.

[BORDALLO AND GUTIERREZ: TOGETHER FOR GUAM. In a strong showing of unity within the Democratic Party of Guam, Congresswoman Madeleine Z. Bordallo and former Governor Carl T.C. Gutierrez shake hands in mutual support of Bill 413-31, which would revise and update Guam’s outdated election laws, and audit ballots never counted in the 2010 election] 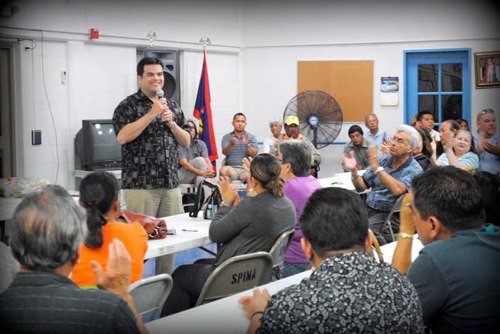 Senator Respicio said, “These pictures tell the real story in that our Party is alive and well. While the opposition tries to have you believe otherwise, we remain united as the Democratic Party of Guam, and continue to be a force to be reckoned with in our island’s political landscape. Seeing Governor Gutierrez and Congresswoman Bordallo embrace, and then hearing her say to the crowd, ‘it feels like old times,’ was energizing.

Governor Gutierrez was gracious, thanking Congresswoman Bordallo for her commitment to election reform, and for responding positively to the Party’s request for a Congressional investigation into the allegations of voter fraud and electioneering in the Guam Election Commission’s
own findings of illegalities and irregularities surrounding the 2010 general election. 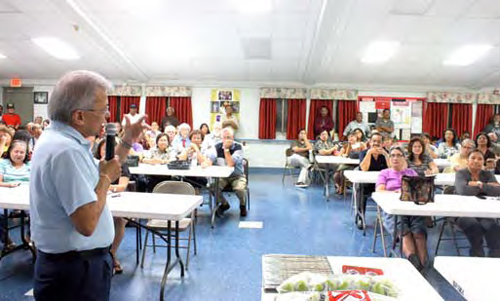 Respicio concluded, “My take away from last night’s meeting is that Governor Gutierrez is true to his word about unifying our Party. His actions are a declaration to leave the past in the past, and that we should all move forward together in sending Congresswoman Bordallo back to Congress, securing the Democratic Majority in the Legislature, electing Democratic Mayors and Vice Mayors, and rightfully taking back Adelup in 2014.”