The two-dayforum on the recovery of tourism after the events of “3/11” segued into the travel showcase that continued through Sunday, October 2.  JATA officials estimated over 111,000 people were in attendance.

GVB Board Chairman Monte Mesa and Deputy General Manager Nathan Denight led the Guam Visitors Bureau in promoting our island in our number one source market.  “The Japan market is vital to the success of tourism on Guam. With our community branding initiatives we are confident that we can offer our visitors a wonderful experience and highlight Guam’s unique culture,” Mesa said.

The Guam booth greeted onlookers with a lively and energetic Hafa Adai Guam Cultural Dance Show featuring local dancers and music from Jesse Bias and Ruby Santos. The Guam Chamorro Dance Academy lead by Master Frank Rabon also performed on the JATA east stage. This year, 55 Japanese students spent two days immersed in classes that included basic Chamorro words, chanting and traditional dance to prepare for the performance. The participants learned about the legend of Fu’una and Puntan and the choreography that goes along with the chanting of the story. 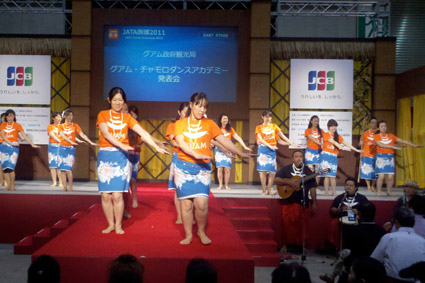 GVB also witnessed the signing of the sister race agreement for the Guam Ko’ko’ Road Race (GKRR) and Teganuma Eco-Marathon. The Teganuma Eco-Marathon is held in Kashiwa City, which is celebrating its 20th anniversary of friendship with Guam this year.  Special Advisor Hiromi Taniguchi, former Japanese Olympic Runner, joined the ceremony and encouraged the audience toparticipate in the GKRR.   As of September 26, there were 416 individuals registered to participate from Japan.

“This year, we are expecting a growth in participation at both the Guam Micronesian Island Fair and the Guam Ko’ko’ Road Race,” GVB Deputy General Nathan Denight said. “These two events and other localpromotions that highlight the Guam culture are increasing in popularity with the travel agents and our visitors.  By continuing to develop and enhance our programs we are able to offer products featuring our island hospitality.”