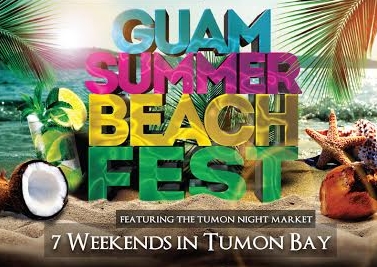 Guam – The Guam Visitors Bureau is introducing a new signature event for the summer called the Guam Summer Beach Fest.

Starting this week, every weekend from July 16 to August 28, there will be an event held at the Joseph Flores Memorial Park or what they’re calling the Ypao Beach Fun Zone. Some of the featured events include fitness on the beach, outdoor films, dance parties, live music and fireworks. According to GVB General Manager Nate Denight, for seven weekends of summer fun, the Guam Summer Beach Fest will also feature a new Tumon Night Market with plenty of food, beverages and goods for sale.
Denight says, “So the idea is that Guam has one of the best beaches in the world and we really want to feature that in the summer time period. So from July 16 to August 28, every weekend, Friday, Saturday and Sunday, there will be a stage by the beach here at Ypao Beach Park with live entertainment, some from Guam and some from Japan, and then we’ll also have food trucks, food vendors with a night market at the same time. I invite the public to come down.”
The Guam Summer Beach Fest is open to the public and will kick off this Saturday night.

*Schedule may be subject to change.