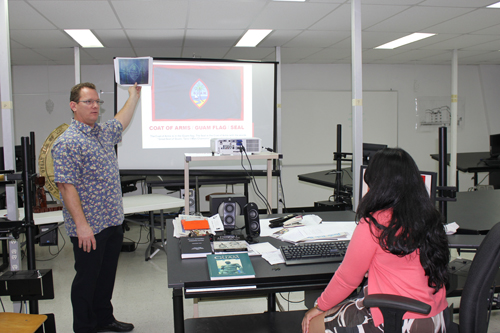 Friday, Tenorio showed the students several renditions of the Guam Seal over the years, including one from Government House with the word “Guam” in stencil lettering, and a more recent design that has the seal looking cartoon-like. He tasked the students to design a standardized seal, from how the coconut leaves should look to the lettering to the ocean water.

[Lt. Gov. Ray Tenorio speaks to a group of George Washington High School students in the GCC CTE AutoCAD II program about the standardization of the design of the Guam Seal today in the GCC AutoCAD lab.]

“Put the soul and character of the people into this,” he told the students.

“We want the students to see a real-world application of the skills they are learning,” said Gil Yanger, chair of the GCC Construction Trades Dept. “This in and of itself was enough impetus for us to agree to the opportunity – coupled with the fact that the lieutenant governor approached us with such an important project. It brings a sense of pride knowing that he believes and fully supports the mission of the College,” Yanger said.

AutoCAD instructor John Zilian says the students will not be redesigning the seal so much as standardizing it.

“It will still have all the familiar markings and colors of the original seal, but the students will define the measurements, colors, font design, rendering and placement of all markings. They will be drawing and structuring their designs to reflect what is stipulated by law,” said Zilian.

All drafts of the seal produced by the students will be presented to Lt. Governor Tenorio’s office for approval. Tenorio told the students that their final design would be set in place by law, making the design official.