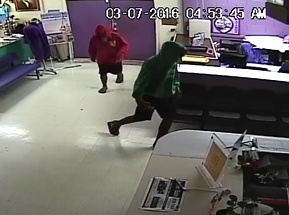 Guam – Thanks to security cameras installed at the George Washington High School, administrators working with the Guam Police Department are now closing in on the suspects that vandalized 14 classrooms.

School administrators gave PNC the surveillance footage from the security cameras installed in the school’s main office. As seen in the footage, on Monday at around 5 in the morning, two suspects are seen walking into the main office wearing hooded jackets. Then minutes later, those two suspects located both cameras and started bashing them in.
GDOE Superintendent Jon Fernandez says he believes that the suspects are students or people who are familiar with the campus. GW High was one of the schools in the priority list for the installment of security equipment as part of the Secure Our Schools Act. Fernandez says they’re working with G4S Security Systems to get six schools outfitted with security equipment within about 60 days. By the end of April, the first six schools will be equipped with security cameras.
Fernandez explains, “This is not the first break in, this is number 11 at GW. We’re trying to track down every lead possible as to who may be doing this damage. To me, it appears that it might be students or someone who’s familiar with the school  layout and what’s in the classrooms. Hopefully, working together with police, we can find out who’s responsible and take action. I saw that a law was passed recently that allowed the government to take action against parents for damage caused by students and I encourage we do that.”
By February of 2017, Fernandez says, all 35 Guam Department of Education schools will be outfitted with security equipment.