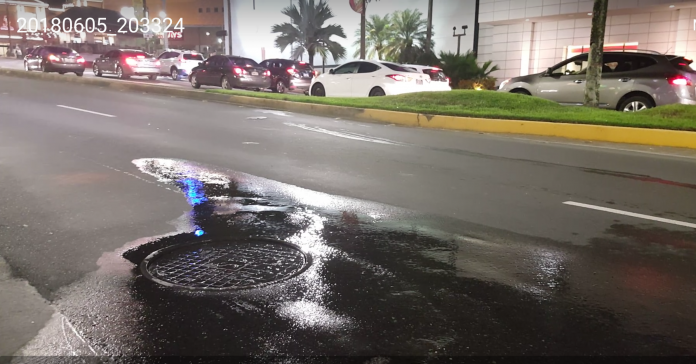 Guam – A slope of Pale San Vitores roadway near a covered sewage manhole has been leaking for the better part of a week in the heart of Tumon. But Guam Waterworks Authority insists repairs are scheduled and it’s neither a public health hazard, nor cause for alarm.

GWA Director Miguel Bordallo says the downhill stream of fluid is not a sewer leak, but clear water leaking from a damaged waterline slightly uphill from the sewage manhole.

Being so close to the sewer manhole, the leak raised eyebrows when PNC first noticed a foul odor on Wednesday night in the Pleasure Island sub-district of Tumon, at the four-way intersection by DFS T-Galleria.

After all, Pleasure  Island is ground zero for the island’s visitor industry. So PNC asked public officials whether the leak presented a health hazard – especially in light of years of sewage and drainage problems in Tumon.

Workers at one nearby business told Pacific News Center last Wednesday night that sometimes their toilet must be flushed several times before the sewage system will swallow the stool’s contents – and that a foul, sulfuric odor is common in the area.

PNC continued to observe the leak on the slope above the manhole through the weekend and, by Monday morning, the cast iron cover was still sodden with the stream flowing down San Vitores Road.

A construction crew observed working within feet of stream’s end at the entrance to the Outrigger Guam Resort told PNC they knew nothing about the leak, and that they were on site to install electrical upgrades underground.

“Whenever there is a drain or water flow issue that is a health concern, GWA makes immediate follow-up inspections of all the restaurants in the area and downstream from the problem area,” Alavi said.

“They check all the grease traps to make sure the blockage hasn’t affected sanitation. Last week I saw some trucks parked next to the leaking manhole and engineers inspecting.”

But the retail manager expressed concern about the general condition of the stretch of San Vitores Road fronting The Plaza, due to possible water damage.

“Actually the road surrounding the leak seems to be showing areas that are sinking. If left unchecked, [it] could be more difficult or expensive to repair, and, of course, hazardous.”

Nevertheless, Alavi told PNC that GWA has informed him that crews will be repairing the freshwater leak this week. Waterworks Director Bordallo suggested that the line puncture may be related to recent construction work.

“It appears that several holes were drilled in the asphalt and that one of them may have damaged the underlying service line,” he said. “Waterline repair crews have [been] scheduled and will correct the problem.”

“GWA has not established who damaged the waterline, but there are indications of orange marking paint in the vicinity of the leak, and very close to the construction activity,” he said. “There is no public health hazard, as this is not a sewer system leak,” Bordallo said.

Responding to PNC’s Monday morning notification, Acting Director of Public Health and Social Services Leo Casil said he would send health inspectors to check the leak. He also said he would call Waterworks, the Dept. of Public Works, and the Guam Environmental Protection Agency to notify each agency of his immediate concerns.