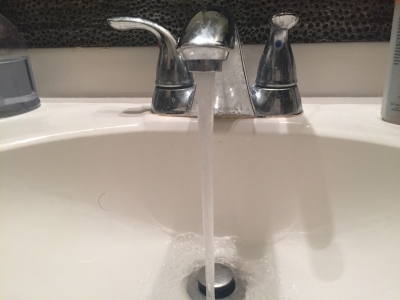 Guam Waterworks Authoruty spokeswoman Heidi Ballendorf says the water tanks at Ugum are full and ready to go; in the event that typhoon In-Fa affects the island.

Guam – Ahead of Typhoon In-Fa, the Guam Waterworks Authority is advising residents to continue to conserve water.

GWA spokesperson Heidi Ballendorf says that, as part of GWA’s preparation for typhoon In-Fa, they have started the process to put their wells on generator power. GWA is also advising residents to hold off on activities such as car washing and water blasting in an effort to conserve water. Yesterday, GWA issued a water conservation notice to southern residents due to high turbidity at the Ugum Water Treatment Plant. Today, Ballendorf says that the Ugum plant is online and producing water, although all Guam residents are still urged to take efforts to conserve water before the storm.

“We’re really asking people again, please don’t wash cars today and water blast driveways, if you can hold off on that until next week,” said Ballendorf.  “Typically the Guam Waterworks Authority, when we move to COR 2, eventually sometime this afternoon, if we haven’t already we will put the majority of our wells on generator power so that will allow if theirs any power fluctuation, customers will have continued water service.”