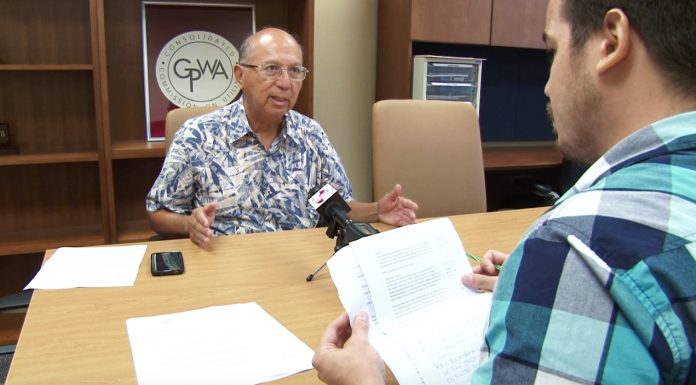 CCU Commissioner Joey Duenas says that when everything is said and done, GWA will have borrowed 670,000,000.

Guam – Expect your water rates to up over the next few years.

Good news for GWA as Fitch Ratings has upgraded GWA from a “BBB” rating to “BB” rating.  According to the report, GWA’s rating outlook has changed from ‘positive’ to ‘stable,’ thus allowing the water agency to have a better chance when they go out to the bond market. GWA has three years left in its five-year rate plan and until that plan is up in 3 years, residents can expect a steady increase in water rates. Consolidated commission on utilities chairman Joseph Duenas explains how this rating is tying in with their five-year rate plan.

“But basically we will have raised rates in 15 years, about 120-percent and 80-percent of that is to pay for debt service. We have planned to borrow money in 2015, by the end of this calendar year,about 160 million dollars again, and by 2017, another 70 million dollars and the total nominal amount of borrowing that we will do when we’re finished in 27, will be 670 million dollars,” said Duenas

Duenas says that most of the 670 million dollars will go towards making up for what he calls quote “60 years of neglect” by the old GWA or PUAG.

Duenas says that a large part of the $670,000,000, they will borrow over the years will go toward federal court ordered projects some of which deal with the island’s waste water system. He explains that there are two types of wastewater treatments. There is advanced primary and advanced secondary wastewater removal treatments. To convert a plant from primary to secondary is expensive.

“So we were discharging and using advanced primary and we were not doing a good job of it. So we did clean up our two plants and make them now meet our, for the past 3 years they’ve been meeting the thing, but us EPA says we’re cancelling all of that, you all, San Diego, Hawaii, Alaska, you all have to go to secondary,” said Duenas.

Duanes says that the EPA’s policy to eliminate advance primary methods have caused GWA to ask for more time to raise funds to switch their plants to advanced secondary. He says that the upcoming military buildup could help alleviate the 300 million dollar cost for that treatment, if the department of defense is willing to foot the bill. But he says that GWA will not ask to borrow another 300-million, on top of the 670 million they will have already borrowed.

“Ok now, the military buildup, however holds the potential that if there’s 106, now we’ve told the military they have to put up the whole amount, but so far they have put a placeholder in a budget bill somewhere, 106 million, well if that helps us then we might use that and add money to it and take [it] to secondary, that’s what EPA wants, we keep telling them we cannot borrow anymore money. So that’s why the military has to come up with whole amount, were at 671 million, 300 million. That’s a billion dollars,” said Duenas.