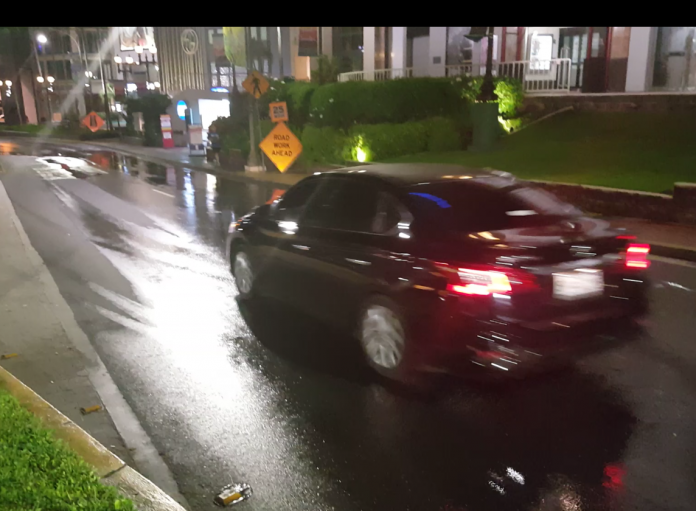 What lies beneath, still unknown

Guam – On Monday, it had been at least twelve days since PNC first noticed a busted water pipe leaking down a slope of San Vitores Road in the Pleasure  Island district of Tumon Village. A damaged patch of asphalt was still leaking at the start of this workweek and Guam Waterworks Authority was still verifying at least one other compromised source spewing untold gallons over this tilt of avenue in the heart of the island’s vacation capital.

Even at a trickle, the protracted spillage is raising concerns about the structural integrity of a stretch of street critical to the island’s visitor industry. On Monday the original puncture marks still showed in the surface coat on the lane nearest The Plaza Shopping Center and remained partially submerged in a thin pool of burbling water.

By the first time PNC reported the leaking span of roadway a week ago, it had already been ruptured no fewer than five days. Our story broke Monday, June 11th. The next day, Tuesday, June 12th, GWA Trouble Dipatch Acting Supervisor Jonathan Herrero announced that GWA had scheduled a Tumon Village water outage from 12:00 midnight to 3:00 a.m. Wednesday, June 13th. “Crews will be making repairs on the main line,” he wrote. But by 5:00 a.m. on the morning of the scheduled repair, an apparent second leak had appeared in the crevice where the concrete median and asphalt road surface meet and was pouring yet more water into the sweep of gravity.

But by Monday morning, the edge of the median was dry and the flow from the punch-holes had slowed down, but the little roadway gashes still trickled steadily. After calling GWA General Manager Miguel Bordallo that day, utilities oversight chair Sen. Telena Nelson was able to tell PNC that GWA had made  partial repairs but was still trying to isolate another leak source in the area.

“When crews mobilized last week to repair that site, there was no flow. It appeared to be intermittent, and so the supervisor investigated and determined it may be an irrigation line that is on a timer.  GVB has an irrigation account which we are attempting to isolate in order to pinpoint the source of the leak before we tear up the road unnecessarily.”

Bordallo has already stated that leakage in this spot is not sewage and therefore does not present a public health hazard. But aside from the continuous loss of freshwater, a greater immediate safety concern has already been stated by a nearby retailer who told PNC on June 11th that he was worried the road was showing signs of sinking. In fact, the road does appear warped in the area of leakage.

So with the rupture festering for the better part of two weeks, PNC is now  asking public officials whether the foundation material under the asphalt is eroding and whether they’re concerned about sinkholes forming.

A week ago, Bordallo said GWA had not established who had damaged the line, but that orange marking paint in the vicinity of the leak was very close to an ongoing capital improvement project in the area.

As of publication time, PNC was still awaiting word from GWA on whether the agency is concerned about erosion under this strip of Tumon’s main drag and the possibility of the asphalt collapsing. Communication Manager Heidi Ballendorf said Paul Kemp is serving as GWA Acting General Manager till Friday morning, while General Manager Bordallo is away from the office.