Guam –  US-based charity Habele has sent a collection of custom designed sports uniforms to Yap Catholic High School and SDA School, the two private high schools on the Micronesian island of Yap. The uniforms, the first of their kind for both schools, will help inaugurate intramural sports leagues at both schools.

“We’re tremendously excited to be helping the high schools with their nascent sports programs,” said Alex Sidles, a Habele director. “These uniforms will give the students a lot of pride and enthusiasm for their schools.”  Previously, the students had been crafting crude jerseys out of old t-shirts by spray-painting the cloth beneath handmade cardboard stencils.

The new uniforms feature the schools’ names and colors on one side—light blue for Yap Catholic, maroon for SDA—and can also be turned inside-out to reveal a white side. The American made reversible jerseys allow the schools to set up teams within their own campuses.

“These are really good uniforms,” said Sidles. “We had them custom designed and crafted for each school. I’ve seen the student athletes play at these schools, and they deserve the best equipment we can get them.”

In addition to the uniforms, Habele will be sending high quality basketballs and volleyballs to each school. “Sports are such an important part of growing up to be a healthy, well-rounded adult,” said Sidles. “It’s a real pleasure to help these schools out with that.”

The two schools are not yet scheduled to play regular matches against one another, but Sidles said he is hoping for a couple of exhibition games during the school year. One possibility is to incorporate an exhibition game into the Yap Robot Day festival. The two schools’ robotics teams compete against each other on Robot Day, and it might be possible to showcase a game between their sports teams at the same event.

“The uniforms just open up more possibilities for public games, intramural leagues, competitions between schools, whatever you can think of,” said Sidles. “I played basketball for my high school, and it was one of my favorite parts of the high school experience.” 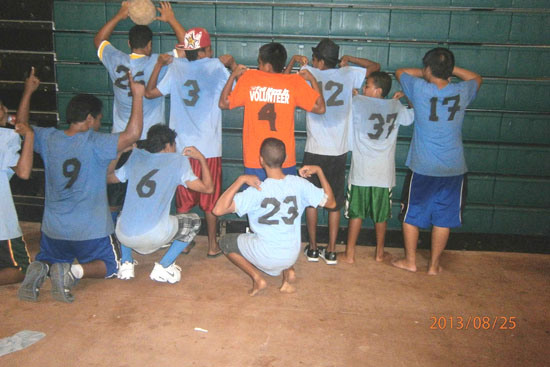 Habele has been working with the two private schools for years, providing scholarships to needy students, supplying the robotics program, and making the targeted donation of library materials. The sports program is Habele’s first initiative in this field and was made possible by Habele’s US-based donors and volunteers, including Barbara and Ray Dalio of Connecticut. Those interested in learning more or in helping Habele’s educational mission can visit www.habele.org.###