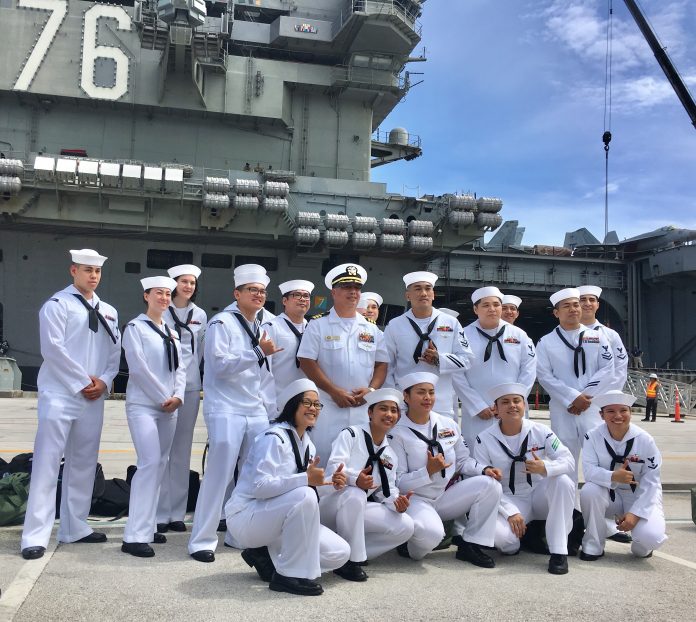 Guam – The USS Ronald Reagan docked on Guam yesterday. With over 5,000 personnel on board, the USS Reagan also brought home 20 proud sons and daughter of Guam. The $4.5 billion dollar ship, and its 70+ aircraft, docked on Apra Harbor’s Kilo Wharf – where anxious family members awaited to greet their loved ones with the Hafa Adai Spirit.

The USS Reagan made its way to Guam, after completing a week-long exercise named Valiant Shield. Valiant Shield is a culmination of meticulous planning and coordination amongst the U.S. Marine Corps, Navy, Army, and Air Force. Sailors will be on Guam for the next couple of days, making their way around the island.

The USS Reagan, stationed in Yokosuka Japan, is over 1,500 miles from Guam. Guam and Japan, while separated by the Phillipine Sea, the Hafa Adai spirit is still alive aboard the Reagan. Guamanians, make up a vast array of the ranks on the Reagan. From a LT. Commander, to officers, and sailors right out of basic, Guam’s sons and daughters, are proud to serve, and glad to be back home.

According to LT. Commander Ivan Borja, the weapons officer of the Reagan, commonly known as the “Gun-Boss” by his men and women, the 20 Guamanians are a tight knit community – with him as their ringleader. Sailors come to him with their concerns, and as their leader, he goes out of his way to make kelaguen, usually chicken and shrimp, but also whatever he can put together from the supplies of the mess deck and board rooms.

PNC also caught up with a Dededo native, Petty Officer Rupley, Logistic Specialist on board the Reagan. On a ship with 5,000 people on board, operating 24 hours a day, 7 days a week, Rupley points out that while there are only 20 Guamanians on board, it’s a challenge to get everyone together due to the schedule and work-assignments that they all have. That however, does not stop the Hafa Adai spirit from going around. He reminisced about the instances where he and his fellow Guamanians run-in to each other, and talk story over a bowl of Spam fried-rice.

When talking to Rupley, he further shared that while he was on Guam, he is most excited about giving back to the community he was born and raised in with his fellow sailors.