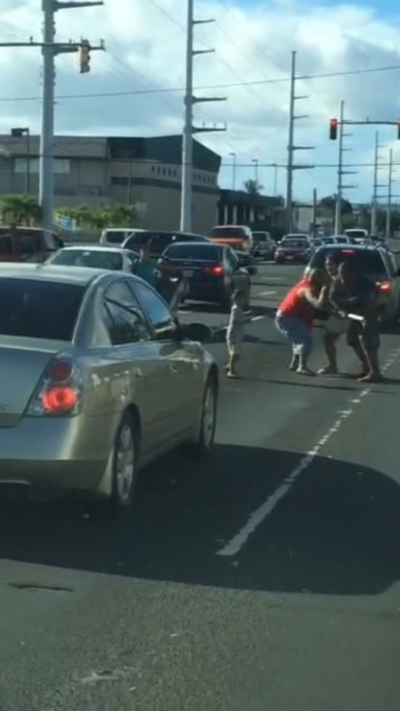 All five suspects are accused of, among other things, rioting.

This was the disturbing brawl in the middle of the busy Route 16 captured on video involving several people, including a small child. This is the same video that was shared all over social media and went viral in just a few hours.
Last week, PNC got in touch with a woman claiming to be the driver of the vehicle and she explained to us that two of the men involved in the fight were her boyfriend and brother-in-law. Also according to her, the other two men who were the occupants of the other car, tailgated their car from Hagatna to Harmon, which later led to the road rage riot. She says her boyfriend and brother-in-law were just trying to protect them.
In the video, her boyfriend in the red shirt is seen wielding a baseball bat at one of the men while her brother-in-law is grappling with the other. Just what appeared to be mere seconds later, her four-year-old son jumped out of the car window and headed for his mom. Fortunately, the mother says the boy was not injured.
25-year old Anna Rose Tyquiengco was arrested for Child Abuse, Rioting, Parked on Travel Portion of the Roadway, however, she was booked and released.
Her boyfriend 25-year old Anthony Jeorge Camacho was also arrested. He was charged with Aggravated Assault, Assault, two counts of Child Abuse, Rioting and Use of a Deadly Weapon in the Commission of a Felony.
Her brother-in-law 20-year old Thomas Jay Cruz is also behind bars for Assault and Rioting.
The other two men involved were 30-year old Steve Aliksa Killin, who was arrested for Possession of a Controlled Substance, Assault, Criminal Mischief, Rioting, Fraudulent use of a License Plate, Expired Registration, Expired Insurance and No Valid Drivers License and his cousin 33-year old Nena Kinere Nena who was arrested for Assault and Rioting.
GPD Spokesman Officer AJ Balajadia says Guam laws are such that any type of physical confrontation between motorists will not be tolerated. Balajadia says anytime residents feel threatened on the roadway, contact GPD or drive to your nearest precinct instead of taking the law into your own hands.