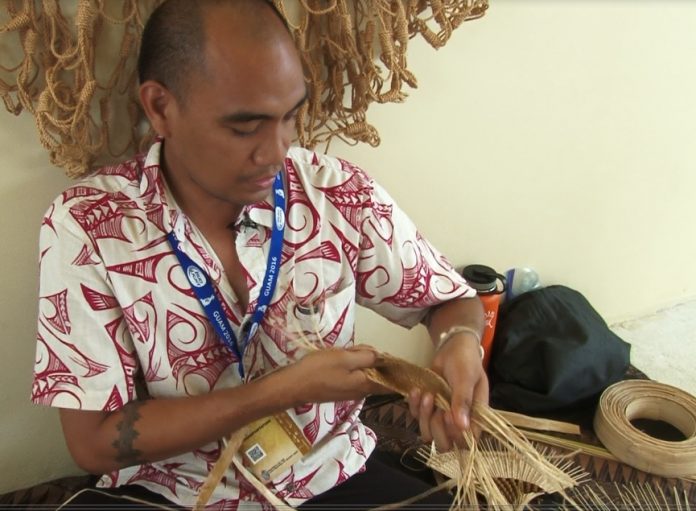 For the sixth day of FESTPAC, we visit the aloha state.

Guam – Drums, kapa, sandals, slings, fans and hair pieces. These are just a few of the samples of craftsmanship Hawaii, or the Aloha state, is showcasing at the Festival Village.

First, we spoke to Marques Marzan who is weaving a sling. Hawaii Delegate Marques Marzan says, “What I’m using is the bark of the paper mulberry tree traditionally used for making kapa but in its raw state, it’s very strong and durable so we use it to make rope,and other kinds of lashes, houses, but it’s also used for a sling. This is the pocket for the sling.”

He even shows us traditional Hawaiian sandals and fans. “These are called kama’a and these are made from tea leaves, dried tea leaves that are twisted together and made into our sandals. These are chief leaf style fans called pae’ahi. Because of this crescent-shaped blade and the patterns, it was a symbol of a chief and their status as a chief. Traditionally the black thread is made from human hair,” says Marzan.

Marzan explains that a person’s bone, teeth or hair was used so that the pieces retain the individual’s spiritual energy. Another use for bark is kapa or bark cloth. According to Kapa Maker Moana Eisele, kapa is fiber used for bedding and clothing.

Eisele says, “This is part of what we used to do so I think it’s really important that you know what those before you what did they did, what they thought, how they did it so that you know who you are as a person and you build on that by teaching the next generation.”

Next, we check out drum maker Dennis Keawe. He says in Hawaii, drums, or pahu, are used for traditional dances. He explains, “Something like this would be a drum available only to the king and royal dance companies. These guys represent his victims in battle. They’re carved to always be serving as a reminder that I did you. So now something like this would only be available to royal court dancers. The other designs have arches or rows that look like the scale of a fish.”

Lastly, the Hawaii delegation is preparing for their performance tonight at the Guam Museum so they’re making hair pieces for their traditional wear.

Hawaii Delegate Kaolu Luning says, “This is la’i or tea leaves. This is a lei. You can do a larger one, one for your neck, we use it for so much like decoration. We got leaves from here and we’re braiding them and it ends up looking like this.”