The Department of the Interior has suggested that Guam and the other territories pay for a $17 million mistake made by the Census Bureau’s count of COFA migrants in the Aloha state.

Hawaii’s congressional delegation issued a joint news release Wednesday claiming the Census Bureau and the Department of Interior made a mistake in their count of COFA migrants which shortchanged the state by $17 million.

According to a report on the Honolulu Civil Beat website, Hawaii got nearly $16.9 million less between fiscal years 2015 and 2020, while Guam was overpaid $14.7 million. The CNMI was overpaid paid $2.2 million and American Samoa was overpaid $21,000.

The Census Bureau and the Department of Interior have admitted the mistake. But he Interior Department is now proposing that Guam and the other territories that receive COFA funding pay for that mistake.

Governor Lou Leon Guerrero has already informed Assistant Interior Secretary Doug Domenech that she is opposed to having Guam make up for the census bureau’s mistake.

The mistake, said the governor, was the census bureau’s failure to count COFA migrants in Hawaii 14 years and younger, resulting in an undercount of about 7,000.

“The suggestion that Guam and the other territories should lose $4 million in COFA compensation in each of the next three years is particularly galling since Guam and the other jurisdictions have for years complained that the $30 million in COFA compensation from Washington is far too little to cover the costs of social services provided to FAS migrants,” the governor said.

Guam Congressman Michael San Nicolas also expressed his opposition. In a statement to the Pacific News Center, San Nicolas said: “Neither Guam nor any other area should have their funding reduced as a result of a Census error. Since this error originates in the Census, then that is where the shortfall should be funded from,” San Nicolas said.

San Nicolas added that he has made that message clear to the federal agencies involved and he does not anticipate any reduced COFA funding levels for Guam at this time. 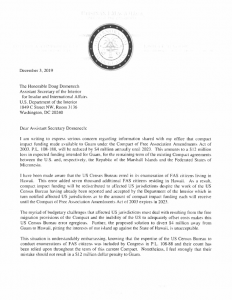