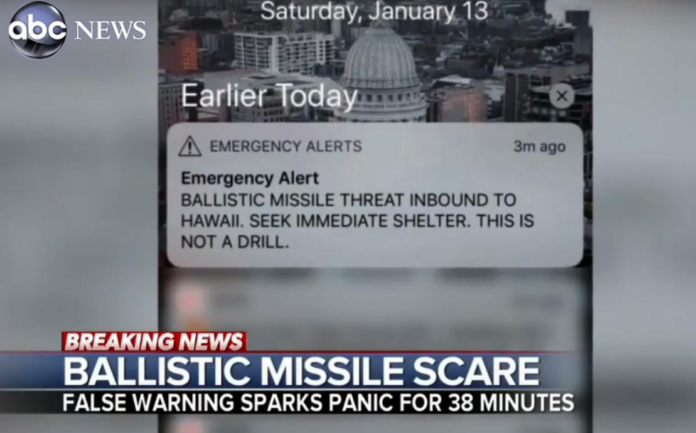 Guam – Last Saturday, Maui resident Kit Zuleta awoke to a frightening emergency alert on her mobile phone that read in all caps:

“Ballistic missile threat inbound to Hawaii. Seek immediate shelter. This is not a drill.”

The alert was sent through the state’s emergency response system.

“In the first few minutes there was that fear,” recalled Zuleta. “Of course, when you receive [the alert] it was like ‘Is this real?’ It clearly stated this is not a drill. And as you know, those are the same words used in Pearl Harbor. So, initially it was shock, and then fear, and then, ‘Oh my God, this is happening.’”

Guam resident and local Obstetrician-gynecologist Dr. Thomas Shieh was on vacation in Hawaii with his family when he received the emergency alert as well.

“At first, I thought it was a joke and then one of my colleagues asked me if I got the alert. Then I had to double check, and look up in the sky. People were running around and everybody was looking at their phones. It was almost as if we all got the same message,” Shieh shared.

What ensued shortly after, Shieh says was chaos.

“People were running for shelter, cars were speeding a little bit, and then I think there was panic in the streets.  It was pretty scary actually because you never think that the day would come when the bombs would be dropped.  I was waiting for the false alarm to come, but it never came,” Shieh remembered.

After the alert was sent, there were no follow up messages, Zuleta said. She tells PNC sirens usually accompany alerts, only this time, everything was quiet. Zuleta is the Marketing Director for the University of Hawaii; she also serves in an emergency group on campus and is familiar with emergency preparedness planning.  She tells PNC the silence was confusing.

Both she and Sheih shared that they waited in agony, for nearly 40 minutes until finally, word came: false alarm.

“If it was a mistake, you would think this would be corrected right away,” Zuleta said. “Within the 38 minutes, people were scrambling for shelter or calling their loved ones. I know of friends who had gone to seek shelter. I know some radio stations who were saying their last goodbye on the air; that was really scary.”

For Guam, a similar false alarm occurred last fall at the peak of North Korea’s threats to the Marianas. However, Charles Esteves, the Administrator for the Office of Civil Defense says our emergency response system is not quite the same as that of Hawaii’s.

“It’s not as simple as pressing a button,” Esteves explained. “To make that same mistake would actually require just a lot more than human error…Whether or not it is human error on the Department of Defense’s part; we’re going to notify the public.”

That aside, Esteves admits that Guam does not even have a mobile EMS.

“We don’t have the funding, and there’s no funding system available in the private sector for the carrier systems to upgrade their carriers to a wireless emergency alert system,” he said.

Esteves added that there is an smart phone app being developed by Guam Homeland, but it’s still in its early stages. Television, radio, and sirens are currently the only means of alert Guam has in case of an emergency.

“We’re adequately prepared, but could we do better? We can…We understand that we’re not going to reach 100% of the island. I’ve stated that before, and that’s because there’s a lot of isolated population groups…there are places where we can’t get the message across to them,” Esteves said.

And assuming that an emergency message does reach an island resident, Esteves says the best thing an individual can do is shelter in place and wait until further instruction.

“We learned that we’re so unprepared for this,” recalls Zuleta. “We didn’t have a go-to bag. We didn’t know where the nearest shelter was. So, we took that event yesterday as a wake-up call as unfortunately this is the reality now that we have to deal with.”