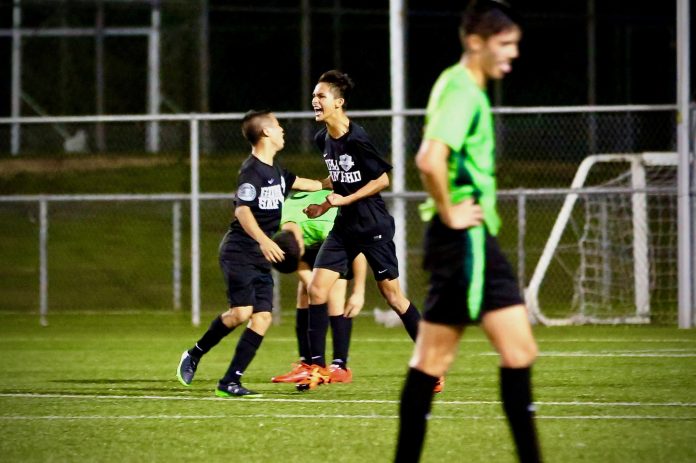 Haya United picked up its first Premier Division win in the Budweiser Soccer League with a 3-2 edge of the Bank of Guam Strykers FC in Week 10 play at the Guam Football Association National Training Center.

HARMON – After a nearly scoreless first half, the Strykers’ Clayton Mitchell fired first with a pair of goals in the 34th and 35th minute to give his team a 2-0 lead.

Haya United answered back before the halftime whistle on a goal credited to Kaito Inoue, who, after being taken down in the box by Strykers captain Ross Awa on his run to the goal, watched the ball roll to the back of the net for the eventual score. Awa was given a yellow card on the play and both teams settled for a 2-1 halftime score.

After Haya United’s Seth Surber leveled the match on a through-ball finish in the 60th minute, the team’s defense managed to contain the Strykers for the rest of the match. Haya United goalkeeper Kyle Leon Guerrero stepped up hugely for his team late in the deciding half, first diving to his right side to stop a penalty kick by the Strykers’ Ricky Katsumata and seconds later, reacting quickly to stop a follow-up shot from Lars Peterson to preserve the 2-2 score.

With just a few minutes left in the contest, the Strykers made a quick play on a free kick, only for Surber to gain possession of the ball and score the eventual game-winner in the 88th minute.

In the Premier Division’s other Week 10 match, Guam Shipyard remains league leaders with a 2-1 win over Quality Distributors. Min Sung Choi and Dominic Gadia scored for Shipyard and Antonio Prieto scored for Quality.

Bobcat Rovers defeated Lots of Art Tattoo Heat 4-2 with two goals from Thomas Medler and one each from Allan Angoco and Joseph Kim. Riley Jones Taijeron scored for the Heat. The Heat’s other goal came on a Bobcat Rovers own goal.

University of Guam Tritons defeated the Crushers FC 6-2 with four goals from Jacques Diambra Odi and one each from Dylan Naputi and Joseph Quan. Michael Diamond and Michael Rosario scored for the Crushers.

The NAPA Rovers D2 defeated the Sidekicks 4-0 with two goals from Juan Cruz and one each from Vincent Magriplis and Matthew Larkin.

Hyundai Family FC defeated the IT&E Boonie Dawgs 5-1 with two goals from Yi Shao and one each from Se Lim, Chul Park, and Yun Kang. Robert Santos scored for IT&E.