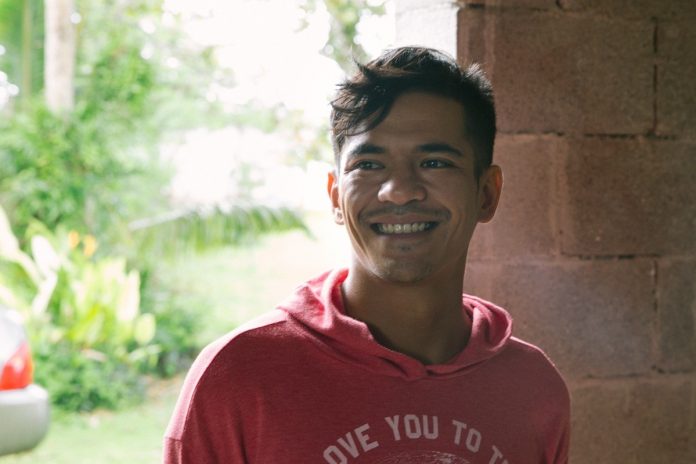 Guam – Patrick Cruz, a 32-year-old man who’s fighting for his life, is hoping to beat the odds against him with not one but two life threatening diseases just as he learns that he’s about to be a father for the first time.

It’s heartbreaking but inspiring, frightening but exciting. Patrick Cruz, fondly known as “Pappy” to his friends and family, was living a pretty normal life, working for Cabras Marine, living at home with his girlfriend and her two young children, one of whom, still an infant. In February this year, Pappy developed a nasty cough that wouldn’t go away.

“Around march it worsened I started getting chest pains and then back pains when I went to sleep at night or take a nap. Basically, every time I laid down I would feel the pain,” explains Cruz.

Pappy finally decided to get his unusual and painful cough checked out. The results shocked him and changed his life forever.

“When we got the reading she said it was a possible lymphoma cancer because they saw something, I think, protruding from the lungs and an anomaly in the heart area,” he recalls.

Between March and June, Pappy was back and forth between doctors, oncologists and cardiologists. It went from possibly lymphoma to tuberculosis, on top of a heart condition. For those several months of waiting, Pappy was fighting whatever illness he had without the help of pain medication.

Finally, in June, after a much-needed biopsy, the results were final.

“So there was this one Tuesday night I was in so much pain. I wasn’t given any meds or pain medication, nothing,” Cruz shares. “We went to go get checked at GRMC. I was hoping they could prescribe me something. The doctor there, she was able to get the readings for the biopsy. She gave it to us and that’s when we found out that I had lung cancer. Stage three.”

After this painstaking process, Pappy was diagnosed with stage three lung cancer along with atrial septal defect or ASD—an anomaly that causes a hole in the heart.

Doctors were stumped with quite the dilemma: which do they treat first? The lung cancer or the heart defect? If they treat the cancer, can his heart handle the chemo? If they perform surgery on his heart, will Pappy’s lungs and body be able to withstand the surgical procedure?

To make matters worse, after running more tests and while Pappy and his family waited for the experts to decide, he received even more devastating news.

“They said I’m now stage four and the cancer spread. And there’s an anomaly in my pelvic region. If it is, hopefully it’s not, pray to God, it could be a bone cancer,” share Cruz.

As heartbreaking as all this is for Pappy and his family, to receive in a matter of weeks all at the same time, there is a light at the end of the tunnel—a tremendous and fateful gift that’s giving the family extraordinary hope.

“To put some positivity in there,  my girlfriend and I found out we’re expecting one,” Cruz reveals. “I wanna fight thins. I wanna get to see them all grow up you know.”

Pappy left to the Philippines Sunday, July 22, where a team of doctors will be able to better help him and decide a thorough and proper treatment plan.

A Go Fund Me account has been set up to help Pappy and his family with medical costs and other expenses. If you would like to donate to Pappy’s cause, visit https://www.gofundme.com/fight-cancer-with-pappy.