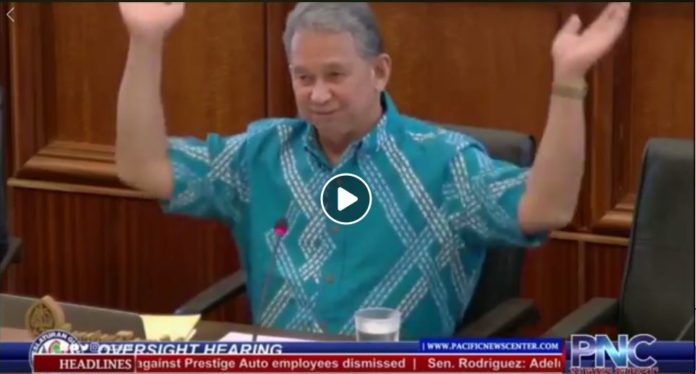 Last night’s inquiry at the Guam Congress Building revealed that the beleaguered Chamorro Land Trust has become a listless political whale, an easy target rich with resources and ripe for poaching.

“I have to admit that the Commission’s management of our oversight and our budget is not anywhere near where it should be,” CLTC Chairwoman Pika Fejeran said at the hearing.

Line items in Director Borja’s oral testimony on Trust finances raised eyebrows and opened the door to a litany of questions from senators on Ada’s presiding Committee on Environment, Land, Agriculture, and Procurement Reform. The first exchange centered on a pair of $320,000 bites out of CLTC’s annual budget.

Leafing through his prepared remarks on the state of the institution’s fiscal management, Borja could not avoid the gaping holes in the Land Trust’s books.

“The page after that is the expenditures for Survey and Infrastructure Fund. Um, this fund is, ah, showing zero right now,” Borja said. “That $320,000 that was originally spoken about, it was transferred out.”

“So the transfer was made, and then during the audit, management responded to the auditor, saying that repayment of the inter-fund receivable due from the general fund was not expected to be made within a reasonable time,” Ada said. Throwing up his arms in a mock show of defeated exasperation, Ada then drove home his point that CLTC’s administrators have been negligent. “In other words, you kind of just [said], ‘these guys aren’t going to pay us back!’”

“Well, I really didn’t throw up my arms up in the air on that,” Borja said. “I was going to challenge it.

“And so it was definitely a challenge that I wanted to go up and challenge why the moneys weren’t there. But, on the advice of the Deloitte & Touche auditors, they said, ‘you will not be able to have that money returned back.’”

But Ada had to wonder whether the Administrative Director had given up that money and other funds a little too easily.

“The bottom line is that in addition to the $321,000, I believe there was an additional $320,000 that the [Calvo Tenorio] Administration—and I’ll use the term ‘hijacked’…used it for general fund purposes and is no longer available…[amounts that] could possibly be used to survey Chamorro Land Trust properties, given the number of surveyors, how much work they could do, probably $350,000 worth,” Ada said.

And that might not be  the worst of it. Chairman Ada and Senator BJ Cruz also questioned why the Chamorro Land Trust needed to pay for 26 new computers for Land Management when the Land Trust division itself has only 14 employees. Probing further, Cruz asked why CLTC’s rent shot up from $20,000 to $124,000 per month and why CLTC continues to shoulder so much cost at the Department of Land Management.

“Well our goal is definitely…not to intermingle it like that, but when push comes to shove towards the end of the fiscal year, we’re faced with the dilemmas on trying to find the moneys that are needed,” Borja said.

Considering the testimony given, Sen. Therese Terlaje wasn’t buying it.

“Yes…the audit…” Borja said. He attempted an answer, but Terlaje cut him off.

“I just think that’s unacceptable for a Trust, and I want to know if commissioners are going to take responsibility for approving this type of expenditure.”

Drawing conclusions from the hearing, it may be little wonder for some why CLTC has so little money left over for mission work such as surveying Land Trust properties for lots and infrastructure and vetting 20-year-old lease applications until the long wait for land is finally over.

Ever the optimist, Commission Chairwoman Pika Fejeran thanked senators for the string of oversight hearings, telling the lawmakers that they’ve helped her and the Commission hone in on problem areas and focus on reform.