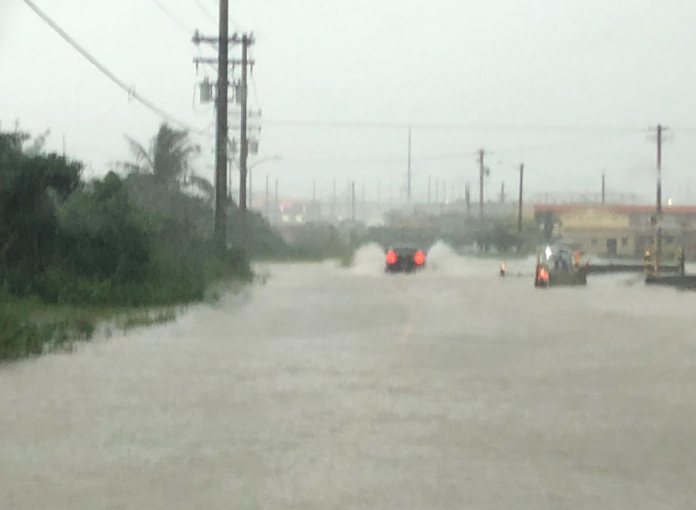 A torrential downpour through the early morning hours Thursday has several island streets flooded and an Urban and Small Stream Flood Advisory issued for the Island.

The National Weather Service (NWS) issued the Flood Advisory around 4:15 am calling for heavy rain with thunderstorms until at least 7:15 am. That has since been extended to 8:45 am. This will cause urban and small stream flooding in low-lying areas. Up to one inch of rain had already fallen by the time the advisory was issued.

Around 6:45 am, Guam Police issued a memo to motorists saying north and southbound lanes of Route 1 Marine Corps Drive in Polaris are impassable. Drivers are being asked to find alternative routes.

Thunder and lightning is expected on and off until at least 7:30 am.

NWS staff confirmed to PNC News the Island is currently experience 5-15 strikes of lightening every 5 minutes.

Residents are being asked to practice lightning safety by staying indoors and if driving, remaining inside the vehicle, and not touching any metal part of the interior.

At 5:15 am, NWS said if the rain continued at these levels, they would be issuing a Flash Flood Warning; none has been issued thus far.