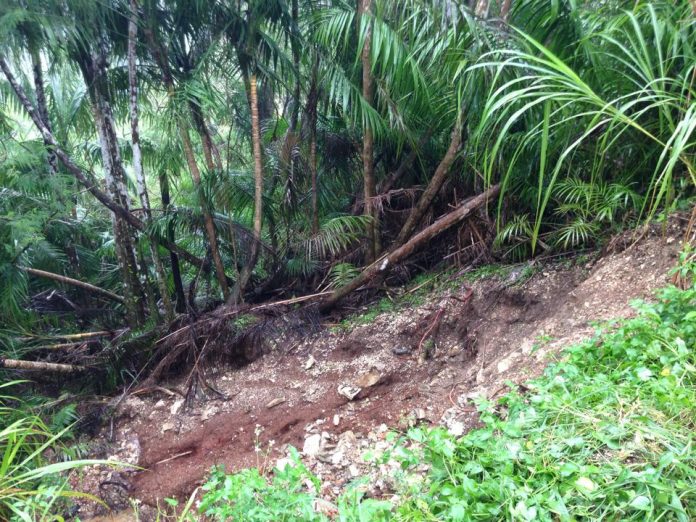 Guam – Heavy rains caused a landslide on Turner Road also known as Channel 10 up on Nimitz Hill this morning.

Asan-Maina Mayor Joana Blas says residents have long complained about the issue and she says she raised those concerns with the Department of Public Works and the Governor’s Office over a year ago, but nothing has been done.

Mayor Blas said, “We have a meeting with about 25 of the residents. It’s been reported let’s say over a year ago. We sent pictures to DPW also to the Governor’s Office to ensure something is done and let’s not wait, but look. Right now, I’m concerned about residents out here. I think it’s funding that’s the problem. We have to do something before someone becomes a victim.”

Mayor Blas adds that it’s not just the eroding land on the cliffside she is concerned about but also the falling rocks on the other side.

Meanwhile, DPW Deputy Director Jessie Palican says the road issue is very critical and high priority to DPW. He agrees with Mayor Blas that something must be done for the safety of residents. He explains that a meeting would have to take place between key players including Land Management and local Environmental Protection Agency.

When asked how long it would take to get the road fixed or at least barricaded, Palican says the first thing that has to be done is to see if the erosion is coming from underneath the road.

Mayor Blas says a meeting with the residents will take place tomorrow to address the issue temporarily.