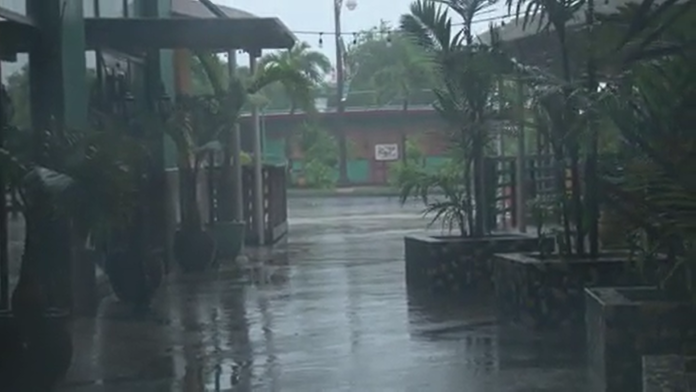 Recent rains have caused extensive flooding around the island, what can Guam expect next?

PNC’s Khyomara Santana has more on the story…

This past week, Guam has been receiving heavy rain showers due to the rainy season, which has caused major isolated flooding problems all around the island.

In viral videos that were sent to PNC, citizens show the southern area of the Island’s extreme flooding.

In this video, a current of brown murky water and a totally flooded street can be seen.

In another video, a driver is going through a flooded street where the water level covered the car’s tires completely.

These floods made commuting difficult for the drivers that had to cross through these areas.

It can be assumed that due to the massive flooding there have been damages to property and cars.

Guam can expect more heavy showers during the next couple of days as said by meteorologist Brandon Aydlett during an interview with K57’s Jane Flores this morning.

Aydlett said, “so looking at the satellite imagery we do have just a nice avenue of heavy rainfall, thunderstorms that is well to the west of the Marianas. We’re just kind of on the eastern edge of that really wet flow but going into the next several days we’re going to be alternating between just kind of a cloudy overcast, some passing showers but we do see the potential for some more heavier showers in a couple of days”—OUT:34:26}

According to a news release from the Governor’s office, Governor Lou Leon Guerrero visited southern families to address the flooding situations and said they will continue to work to find solutions to these problems.

“This is a reminder of not just the devastation caused by heavy rain but the long-term needs of communities periodically impacted by natural disasters. Our Administration will stand by those communities until the work is done to ensure that our response to such disasters is the best it can possibly be.”