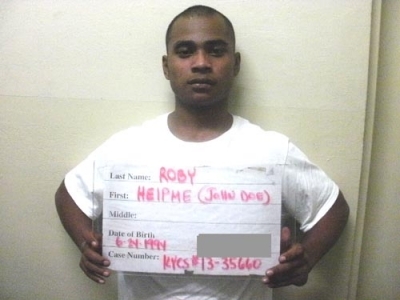 Guam – It was unanimous. Jurors this afternoon found Helpme Roby guilty of all charges in the Santa Ana gang rape case.

Eleven charges that include first degree, second degree and third degree criminal sexual conduct and it was guilty across the board. The 12 member jury, 6 men and 6 women, unanimously agreed that Helpme Roby raped two minors, one aged 15 and the other only 11 years old at the time.

20-year-old Roby was convicted of forcing the girls to drink vodka then repeatedly raping the two in a jungle area outside the Santa Ana subdivision in Dededo. Defense Attorney Terrence Timblin expressed disappointment at today’s verdict.

“Obviously we are disappointed. We thought there were quite a few holes in the case and reasonable doubt, but the jury thought otherwise and that’s pretty much, that’s who counts,” Timblin said. “We’ll be asking for the minimum 15, which is what the co-defendants already have in their plea agreements and we feel that [Roby] should not be punished for exercising his right to go to trial and having his guilt determined by a jury.”

Prosecutor Elizabeth Vasiliades, on the other hand, was satisfied with the jury’s decision. Four other defendants in the case had already pleaded guilty. Roby was the only one who chose to go to trial.

Roby is scheduled to be sentenced on January 28 at 9 am. He faces a minimum of 15 years to life in prison.

READ THE STATEMENT FROM THE AG’S OFFICE BELOW:

forth against him after a Superior Court Jury deliberated for a day and half. He was convicted of 5

conduct as a second degree felony.

About a year ago, in the area of Santa Ana, Dededo, a group of young men forced their two young

victims to drink alcohol, forced them into having sex, and tried to force them to keep their secret.

Instead, the older victim went to Guam Police Officers and gave an account of the atrocious event.

The older victim, who was 15 years-old at the time, was walking by when she noticed one of the

defendants on top of the 11 year-old victim, sexually assaulting her.  The other defendants were

lined up behind him, waiting to take their turn. The predators, who were a part of a gang called

“Monstar Gang,” were taking turns engaging in sexual acts with the helpless and severely

intoxicated victim. The 15 year-old victim called out to the boys and admonished them. One of them

punched her in the face, and she blacked out.  The next thing she remembered, she was being

interviewed at the police station.

surrounded by trash. She had scratches and cuts on her knees and elbows, sticker burrs were stuck

in her hair, and she had a bump on her forehead. Officers carried the young girl out and brought her

to the police station. Both girls complained of pain in the genital area. They were taken to Healing

Hearts where they were examined and treated.

charges; 3 to fifteen years for each of the second degree convictions, and 1 to 8 years for the third

stand up against not one, but all five of their perpetrators,” said Attorney General Leonardo M.