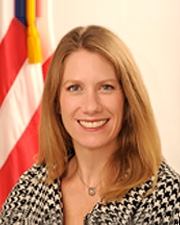 Melissa Stafford Jones is the director for Region 9 of the US Department of Health and Human Services. Her visit is an opportunity for island leaders to voice their concerns regarding the dire situation at GMH.

Guam – The Director of the US Department of Health and Human Services Region 9 is here on Guam and she met with hospital management as well as Governor Calvo.

The governor says they talked about the crisis going on at GMH in hopes of getting approval from the HHS secretary for the $19 million reimbursement the hospital has been seeking.

She’s here on Guam and today she met with Governor Eddie Calvo and GMH management.

“We talked about things like, one of the questions was, what are the challenges. Obviously the overarching thing is financial,” says GMH CEO PeterJohn Camacho.

Governor Calvo tells us that he and GMH management conveyed to Jones the ongoing crisis at the hospital; in particular, the $26 million debt they are in. The governor says they discussed the reimbursement GMH is seeking for Medicare costs, as well as the TEFRA rebasing to adjust Medicare reimbursement rates for Guam.

“When you take a look at a $26 milion payable out of this hospital. We also believe that if they were to make good on reimbursing us for these costs we can get close to $19.5 to $20 million. That would take a heavy burden off the hospital and tha taxpayers of Guam,” explains Governor Calvo.

“We do believe that the secretary of Health and Human Services, with a stroke of a pen, can get us $19.5 million to this hospital, which we believe we are owed. The Department of Health and Human Services has made it clear that they believe that’s something that’s gotta go through Congress. We have a difference of opinion,” the governor points out.

While that may be a setback, Governor Calvo says the good news is Jones says the Obama administration is aware of the situation regarding the rates.

“She also brought up, again, with the efforts in Puerto Rico bail out, that the Obama administration is looking toward, again, certain types of resolutions including equity with Medicaid. If that occurs then this will really place some heavy burdens off our backs where we will be treated just as fairly and as equally as the other 50 states in the union,” explains Governor Calvo.

While decisions were not made during this meeting and there’s no telling whether Health and Human Services will approve the $19 million reimbursement or the TEFRA rebasing, Camacho says Jones understood the sense of urgency in the situation.

“She didn’t seem to feel that it was not possible. I think it was just more the for us it’s a sense of urgency. Decisions need to be made. My understanding is she’s going to be bringing that message back; is the sense of urgency because of our situation,” notes Camacho.

Jones will also be visiting Saipan as part of her trip.