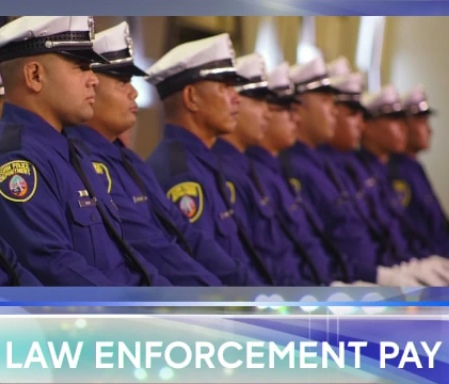 At the Legislature Monday morning, senators held a hearing for a bill that would establish a pay scale standard for all peace officers.

Also known as the Post Attraction Retention and Incentive Act of 2021, the measure introduced by Sen. James Moylan seeks to address the obstacles to the retention, hiring and retention of law enforcement officers or LEOs

The PARI Act would establish a common pay scale to address the discrepancies in pay among law enforcement agencies.

At the hearing Monday morning, Dr. Richard W. Fee spoke in favor of the bill.

Fee has a background in law enforcement education, having been a professor of education for many years before joining the Judiciary of Guam as a judicial educator.

As a judicial educator, he has the responsibility of training all marshalls and probationary officers to the POST Commission standards.

He says that while the POST Commission is in the process of making changes to the system for recruiting and training and certifying law enforcement, his testimony is focused on the more critical issue of salaries and the high attrition rate among law enforcement agencies.

“If you look at our attrition– again we have 1220 — our attrition rate across the board is about 8 to 10 percent each year which is extremely high. That means our academies have to generate 97 to 122 new recruits each year just to break even. Now all of these agencies — 1220 — if you ask them individually — they’ll probably tell that they are down 10 or 20 percent already plus the attrition rate,” Fee said.

In particular, Fee mentioned GPD’s attrition rate since the police department makes up the majority of law enforcement officers across POST agencies.

“We may have one or two academies in a year. But with GPD alone, they’ve lost 12 young officers and the main reason comes down to salaries,” Fee said.

The bill authorizes the commission to conduct a study and make recommendations. But Fee emphasized that the proposal would have to go through legislative and executive review and approval.