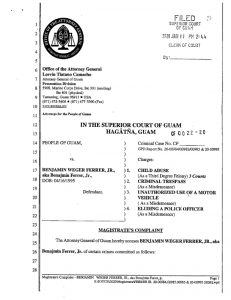 24-year-old Benjamin Weger Ferrer led nearly a half dozen patrol cars on a dangerous high-speed chase Friday that finally ended with his arrest in Yigo.

Ferrer was driving a gray Toyota Highlander that did not belong to him.

According to the magistrate report he reached speeds over 50 miles per hour during the chase.

“Police noted that a pedestrian was almost struck by the Highlander as well as several collisions which were narrowly avoided,” states the complaint. They also observed “the vehicle go into oncoming traffic and go through red lights.”

A woman and three children, aged 11, 2 and 2-months, were inside the vehicle throughout the chase that began on Route 4 in Sinajana.

GPD officers used their vehicles to try and block Ferrer at a number of intersections but he sped by them.

Officers then took him into custody without further incident.

Ferrer has had previous run-ins with the law.

In January 2014 he was arrested, along with another suspect,  in connection with a campaign canvasing fraud scheme.

The pair were accused of trying to sell Calvo/Tenorio Campaign Tickets that were stolen from a vehicle that had been broken into.