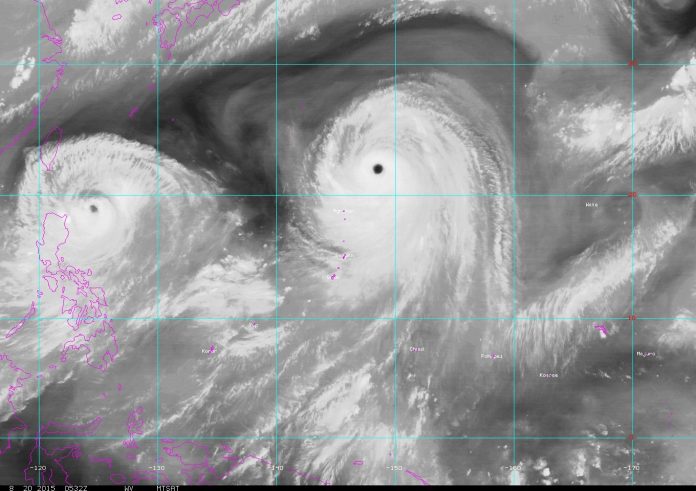 NWS expects winds of up to 35 miles per hour.

Guam – The National Weather Service says, “[Due to Super Typhoon Atsani’s effect] be prepared for rainy and windy conditions today and tonight,” in its Special Weather Statement.

In addition to the statement, NWS also released another Area Forecast Discussion this afternoon saying that monsoon winds are increasing across the region. “Winds are increasing a little…and should peak around 20-30 mph on Friday…which will require a Wind Advisory in the next forecast package,” NWS adds.

According to the National Weather Service’s Mariana Island Forecast, winds from southwest will blow at about 20 to 30 miles per hour throughout tomorrow (Friday), but they may  gust up to 35 miles per hour. By Friday night winds are expected to come down to 15 to 25 MPH range and by Saturday, 15 to 20.

.TONIGHT…MOSTLY CLOUDY WITH ISOLATED SHOWERS AND THUNDERSTORMS. SOUTHWEST WINDS 15 TO 20 MPH. LOWS AROUND 76.

.FRIDAY…PARTLY SUNNY AND WINDY WITH SCATTERED SHOWERS AND ISOLATED THUNDERSTORMS. SOUTHWEST WINDS 20 TO 30 MPH WITH GUSTS TO 35 MPH. HIGHS NEAR 86.

.SATURDAY AND SATURDAY NIGHT…MOSTLY CLOUDY WITH ISOLATED SHOWERS AND THUNDERSTORMS. SOUTHWEST WINDS 15 TO 20 MPH. HIGHS AROUND 87. LOWS NEAR 76.