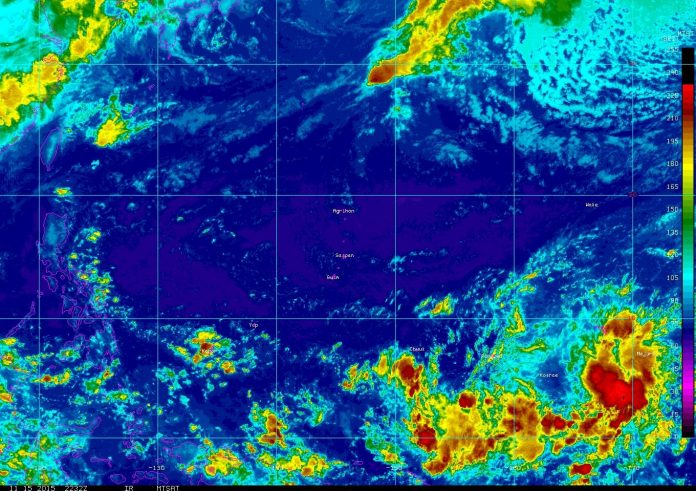 Chance of rain will also increase due to JTWC Invest Area 95W.

Guam – The National Weather Service expects to see breezy and rainy days this week, due to JTWC Invest Area 95W.

Although 95W has been almost stationary for the past 24 hours, due to its presence, NWS expects winds to pick their speed up to 20 miles per hour today, or about 5 MPH higher compared to past seven days’ average of up to 15 MPH. They are expected to get even more breezier at up to 25 miles per hour throughout this week, according to the Mariana Island Forecast this morning. Surfs on the east will also be higher at up to 9 feet today, and is expected to increase about 1 or 2 feet by tomorrow night.

As a result, “Have continued to carry mention of possible high surf in the SRFMY (Surf Zone Forecast for Guam and the Northern Mariana Islands) for later this week and have added the possibility of small craft advisory conditions to the CWFMY (Coastal Waters Forecast for Guam and the Northern Mariana Islands)…as either winds…seas or both…could reach advisory levels within the next day or so,” NWS writes in this morning’s discussion.

Besides the high winds and surfs, chance of rain is expected to also increase by Wednesday night, due to the disturbance; however as confidence level of forecast on 95W’s track, timing, and possible strength near the Marianas is low, this forecast could change.

JTWC Invest Area 95W was seen near Majuro since last week, and has not moved much since then; NWS writes in its discussion this morning that such slow or even stationary behavior of the circulation might let clouds and showers to stay in the Marianas until sometime this weekend.

.TONIGHT THROUGH TUESDAY NIGHT…PARTLY CLOUDY AND BREEZY WITH ISOLATED SHOWERS. NORTHEAST WINDS 15 TO 25 MPH. LOWS AROUND 77. HIGHS AROUND 88.

.WEDNESDAY…PARTLY SUNNY AND BREEZY WITH ISOLATED SHOWERS. NORTHEAST WINDS 20 TO 25 MPH. HIGHS AROUND 87.

.WEDNESDAY NIGHT THROUGH SATURDAY NIGHT…MOSTLY CLOUDY WITH SCATTERED SHOWERS AND ISOLATED THUNDERSTORMS. LOWS IN THE MID 70S. HIGHS IN THE MID 80S.